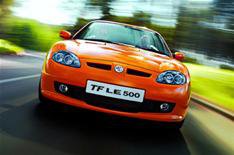 It has rear parking sensors, air-con, an MP3-compatible CD, a body-coloured hardtop and leather sports seats.

MG's Chinese owners, SAIC, claims to have already sold 70 per cent of the 500 cars being built, and say that other variants will follow later in the year.

The first LE500s will be delivered to customers in September.