MG TFs on sale by September 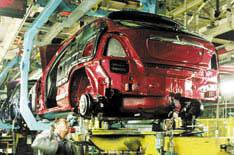 The MG TF will go back into production at Longbridge in Birmingham at the beginning of August, with the first cars arriving in showrooms in September, according to the company's owner, NAC MG UK Ltd.

The announcement ends a long period of uncertainty for the company, which postponed the relaunch of the TF several times.

The cars will be sold through a network of 57 dealers, most of which are former MG Rover dealers.

The company has also announced that it is planning new MG models to be launched at a later date.