MoT to be scrapped for classic cars? 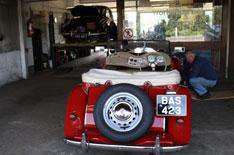 The Government wants to scrap the MoT test for classic cars made before 1960, transport minister Mike Penning revealed today.

Opening a consultation on the proposals, he said the move would cut red tape and save money for the Government and classic car owners.

'Owners of classic cars are enthusiasts who maintain their vehicles well they don't need to be told to look after them, they're out there every weekend checking the condition of the engine, tyres and bodywork,' said Penning.

According to Department for Transport figures, the estimated 162,000 pre-1960 vehicles make up less than 0.5% of vehicles on UK roads.

The initial MoT test failure rate for these vehicles in 2009 was less than 10%, while the same measure for post-1960 vehicles was more than 30%.

The changes are being considered separately from the Department for Transport's main MoT review.