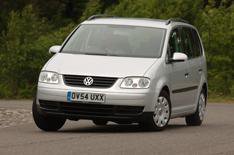 Owners also failed to be impressed by the Touran's stereo/navigation system, either.

Otherwise, marks were mostly average including those for reliability, vehicle performance, interior appeal and nearly all aspects of dealer service.

The few highlights were good all-round visibility and fuel economy.

Only the reliability of the air-con scored top marks, but owners were pleased with the dependable engine, transmission and exterior electrical features. Low service and repair costs also scored high marks, as did the user-friendliness of the air-conditioning.

Vehicle owner satisfaction score: 75.9%
Overall ranking: 85th
No real horror stories here, but owners weren't keen on the Scnic's engine and gearbox, nor the functionality or reliability of its air-con system. Its looks didn't go down well, either.

However, all aspects of reliability (apart from the air-conditioning system) scored average or above, and owners praised the Renault's roomy cabin, storage facilities and visibility from the driver's seat. Each aspect of the ownership costs and dealer service was given average marks.

Only the Citron Grand C4 Picasso scored higher marks for interior appeal, with respondents rating every area above average. However, ownership costs sealed the Ford's fate: insurance, fuel, and service or repair bills were too high.

Vehicle owner satisfaction score: 74.9%
Overall ranking: 93rd
A similarly dire result to last year, with Zafira owners having a big moan about reliability and visibility. Mechanical problems were high on the list of gripes, but the biggest number of gremlins cropped up in the air-con and audio/sat-nav systems.

What's more, the seven-seat Vauxhall didn't have any redeeming features in the eyes of its drivers the engine, gearbox, driving dynamics and dealer service fared best, but even these were graded as only average.

Vehicle owner satisfaction score: 74.5%
Overall ranking: 97th
This was a mixed bag, but overall a very disappointing finish for the 5. Running costs (fuel economy in particular) were slated by owners, as was mechanical reliability (but not the engine or gearbox). Drivers didn't approve of the driving dynamics or the car's performance, either.

Aside from some glitches in the audio/navigation system, the interior did at least retain some of Mazda's good reputation for robustness, with top marks awarded for air-con and seat reliability. However, owners were lukewarm about visibility and styling.

Vehicle owner satisfaction score: 73.8%
Overall ranking: 99th
The Galaxy was worst of the MPVs and third bottom overall. So what went wrong for Ford's biggest MPV? Reliability, mainly owners were damning about the interior, with large numbers of seat and audio/navigation system woes. Bodywork issues and exterior electrics were also a serious concern. When things did go wrong, Ford dealers were less than helpful service was given a real kicking.

Owners also disliked the styling, driving dynamics, interior and insurance costs. In fact, they weren't particularly positive about anything.

How they rated:
Click the image, below, to view a larger version of how all the cars rated.

Name: Brett Colley Job: IT Technician Model: 1.6 HDi Exclusive EGS Mileage: 8000 'I reckon the Grand C4 Picasso is the most stylish MPV around. Build quality is good, and I also like the engine and gearbox. The only problem I've had so far is that the plastic wheelarch liners dropped down slightly hardly a major reliability issue. Otherwise, the car has been fine and, because I'm a member of C4owners.org, I've been able to use other owners' experiences to find a good dealer.'