New garage code is on the way

* RMI plans Trust My Garage code * To be launched in the next few weeks * 8000 potential members, but few details so far... 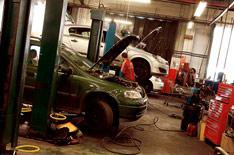 A new garage code designed to give motorists confidence in the service they will get from workshops is to be launched soon.

The Retail Motor Industry Federation (RMI), which represents thousands of franchised and independent garages in the UK, says it will officially launch the Trust My Garage code in the next few weeks.

It will join other initiatives such as the Motor Code for Service and Repair, which is run by the Society of Motor Manufacturers and Traders (SMMT) and has 6500 garages signed up.

Mystery shoppers
Chairman of the RMI Paul Williams said: 'This is not just a code in competition with other codes, it is an opportunity for our members to take on board our aspirations for consumer service.'

Mr Williams announced the plans at the RMI's annual dinner last night where it was revealed that joining the scheme will involve filling in a self-assessment questionnaire and agreeing to mystery shops to help maintain standards.

Membership of the scheme will be free, which should help improve membership figures.

At this stage it is unclear whether the code will provide conciliation and/or arbitration processes in the event of disputes between customers and garages.

Referring to an earlier industry commitment to put all of its weight behind one effort to improve standards, Motor Codes Ltd director Chris Mason said: Im disappointed that they decided not to go along with the agreement of 2007.