What little time we spend driving these days should be done in something fun, but is a new Jaguar or similarly priced used Alfa Romeo the best way to get your motoring kicks?...

*Price today is based on a 2020 model with average mileage and full service history according to the What Car? Valuation service, correct at time of writing

If what many are suggesting comes true, the commute as we knew it could be a thing of the past. So surely the limited amount of time we get to spend driving at the moment (and possibly in the future) should be spent in something a lot more stimulating than the crushingly-competent executive cars we'd normally gravitate to?

In the new car corner, we see the revised Jaguar XE taking a bow in perfectly potent 247bhp P250 form. Yes, the diesel D180 would be the automatic choice, but if we're not clocking up huge mileages anymore, then why not swap a few miles per gallon in favour of a punchy petrol that thrives on revs?

Representing used cars is the Alfa Romeo Giulia - in 276bhp Veloce form, no less. If this were fresh off the factory floor, it would list at over £40,000, but give it a year and you can find a 2020 example with under 10,000 miles on the odometre for similar money to an XE. But which of the two is the best choice if enjoyment is your main priority?

If this were a test between a pre-facelift XE and a Giulia, then there wouldn't be a massive amount of difference between the two in terms of materials used. However, the revised XE has a far plusher interior than what went before, with soft touch materials in all the places you're likely to prod on a regular basis. It's a big enough step forward for us to say it has the edge on quality over the Giulia. 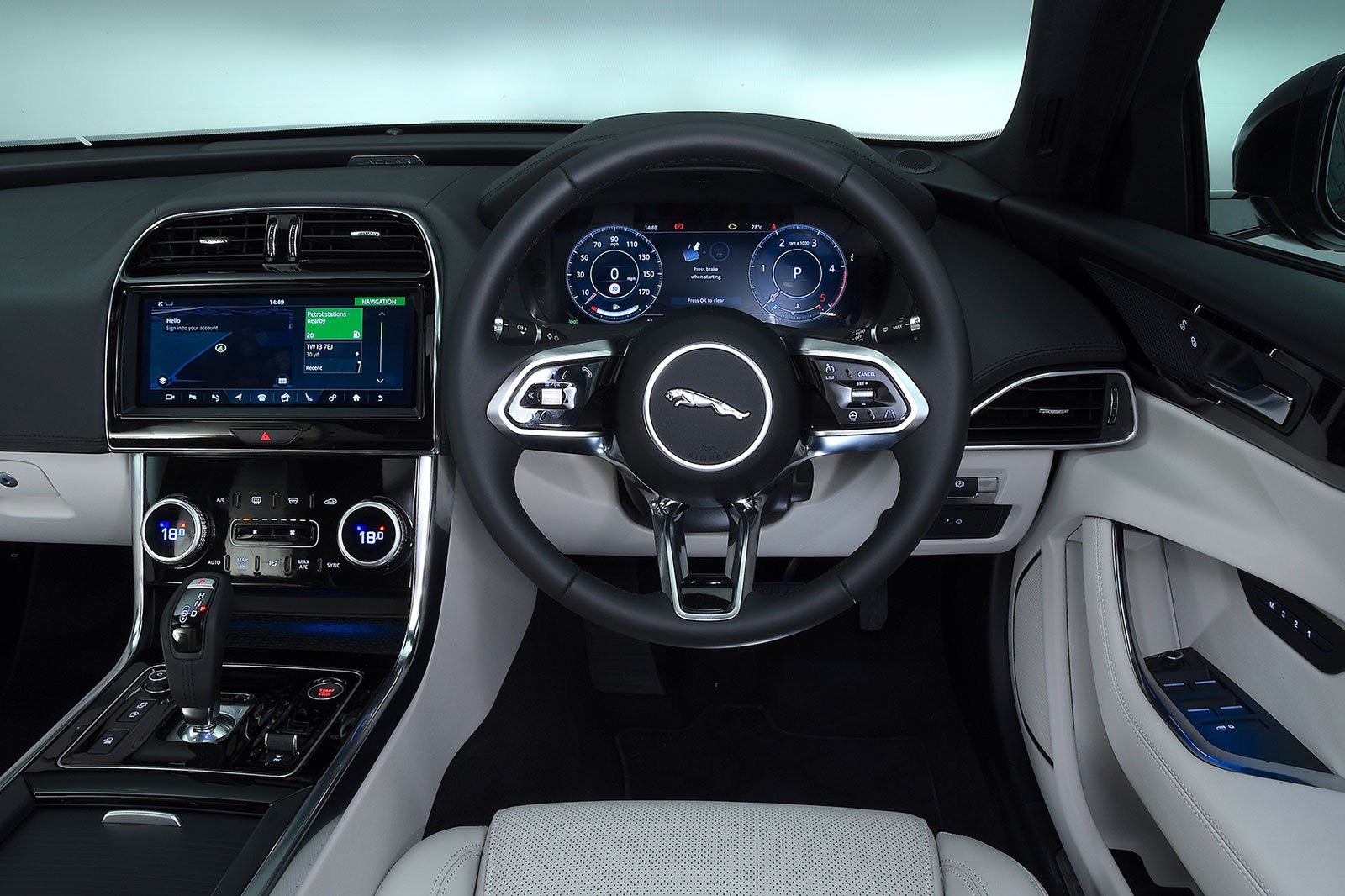 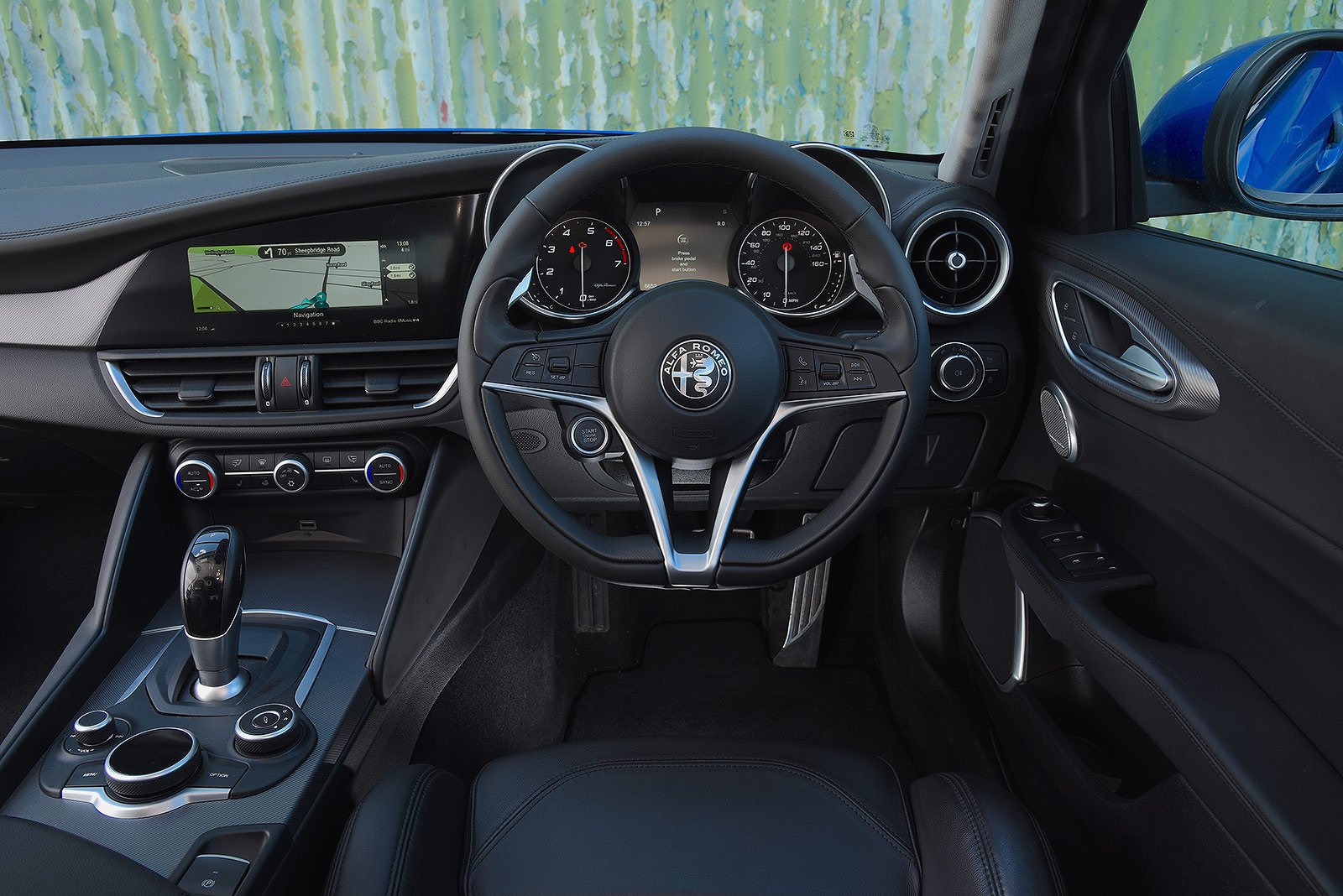 That's not to say that the Giulia is without merit in terms of ease of use: the rotary controller and shortcut keys next to the gear selector help massively when operating the infotainment system. The 8.8in screen is a bit on the small side compared with the 10.0in display in the XE, and there isn't much to separate them in terms of intuitive menu navigation is. Both cars come with Apple CarPlay and Android Auto smartphone integration.

The 'S' spec XE gets all the equipment you'd need including 18in alloy wheels, leather upholstery, dual-zone climate control, automatic lights and wipers and cruise control, but the Veloce version of the Giulia goes a fair bit further by including keyless entry, heated front seats and steering wheel, and a set of upgraded brakes. 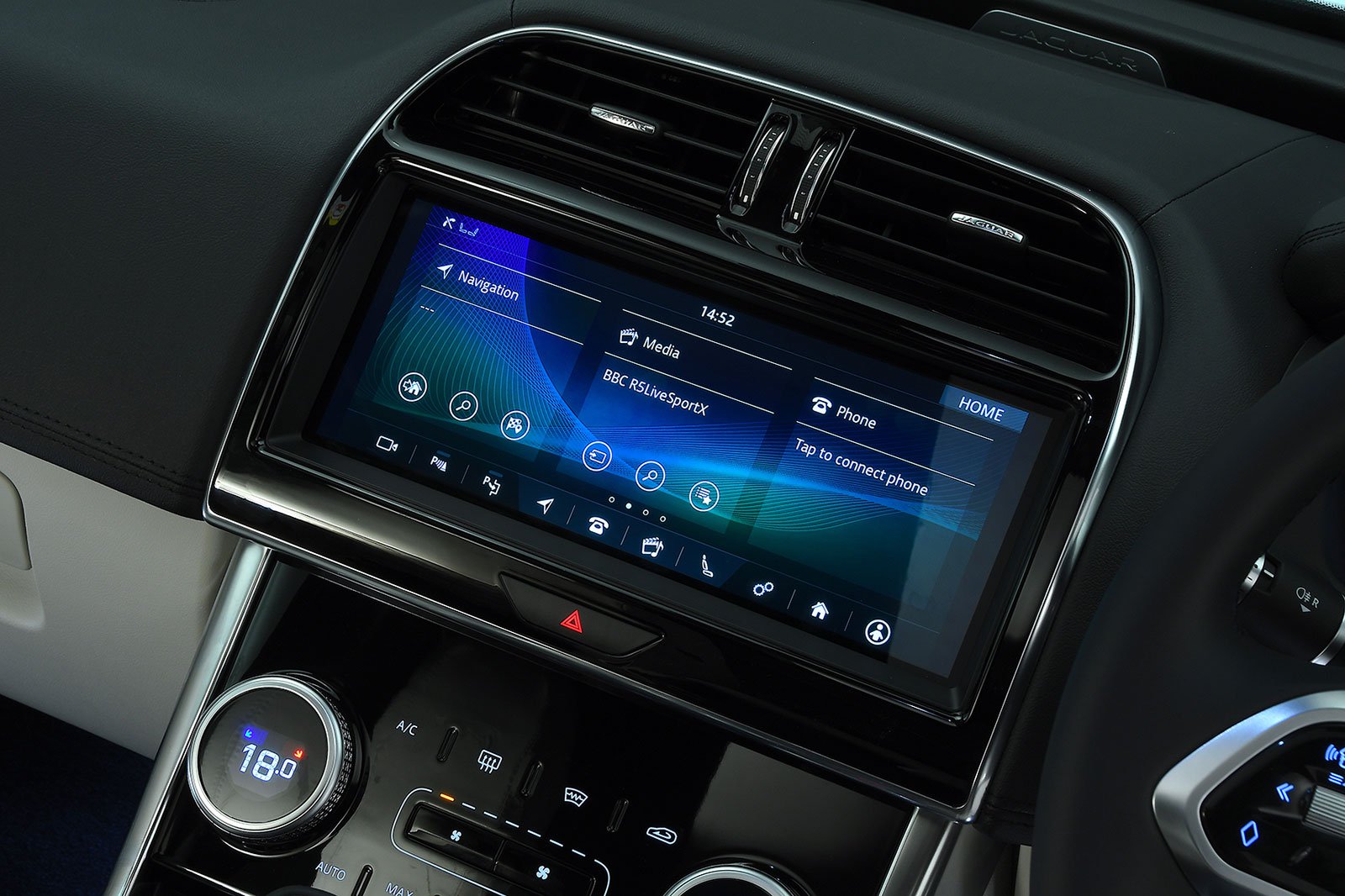 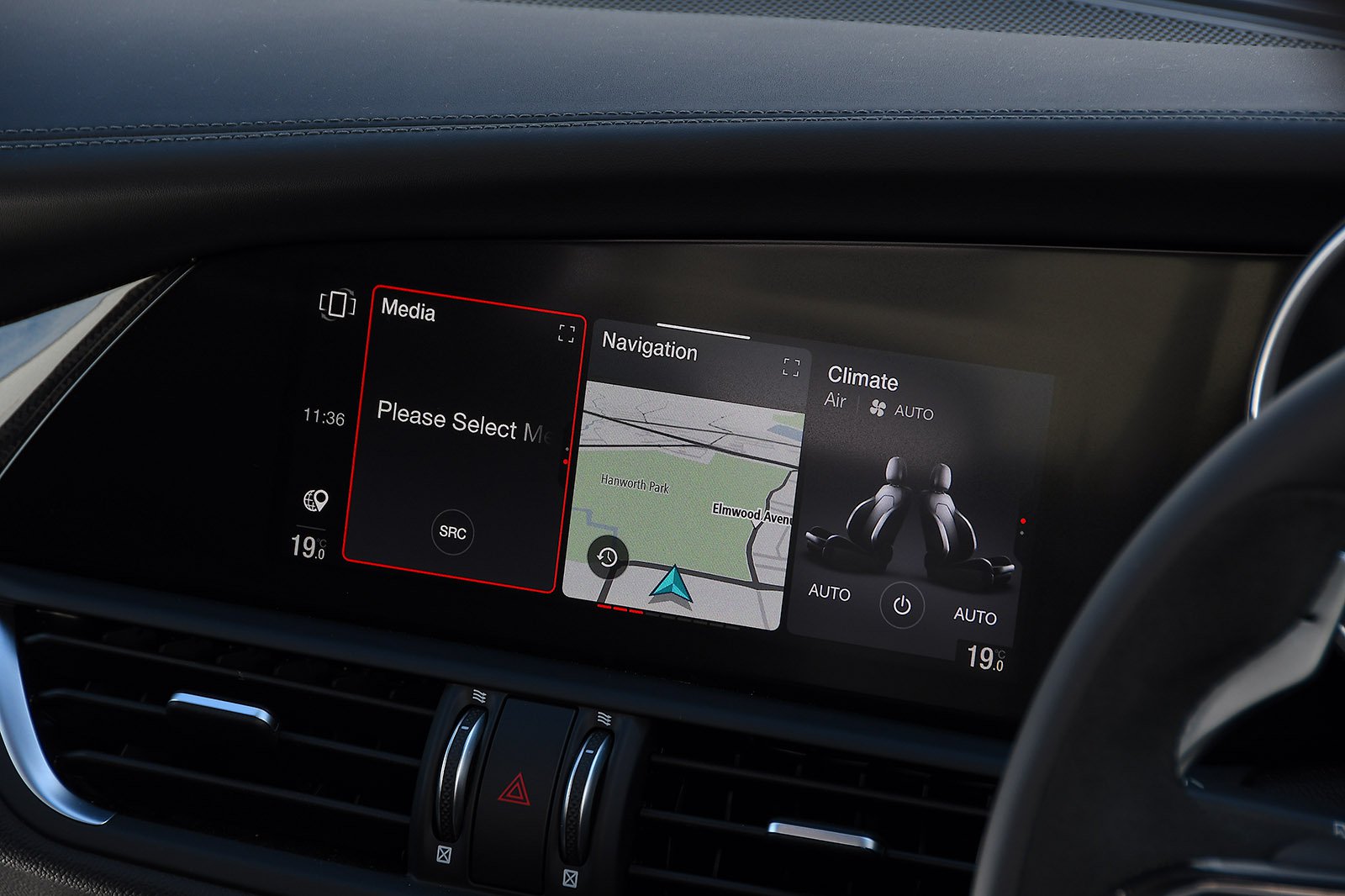 There is an odd quirk to getting into the Alfa Romeo in that you have a relatively narrow entrance that's impeded by the central pillar, but more on that in a moment. Once inside, you will notice that the seat in the Giulia goes farther back than in the XE and that you get more headroom overall. The width is exactly the same, though.

Shorter drivers may not notice this, but those with long legs who sit farther away from the wheel could find that over the shoulder visibility compromised because that awkwardly placed central pillar, meaning you end up looking at the seatbelt retractor rather than what's beside you out the window. Forward visibility is also compromised by chunky windscreen pillars. Mind you, the shallow rear window in the XE can hinder parking, so it's a good job parking sensors front and rear come as standard, as per the Giulia.

The Giulia does at least gain some ground back in being far more accommodating in the back. The trouble with the XE is that its trick rear suspension (another item we'll get to later) eats up a lot of interior room, with the noticeable compromise being for passengers in the rear. Tall people will find they need to slouch in order to clear the roof lining, but then they'll find that their knees are pressed firmly into the front seats because it has the least leg room. 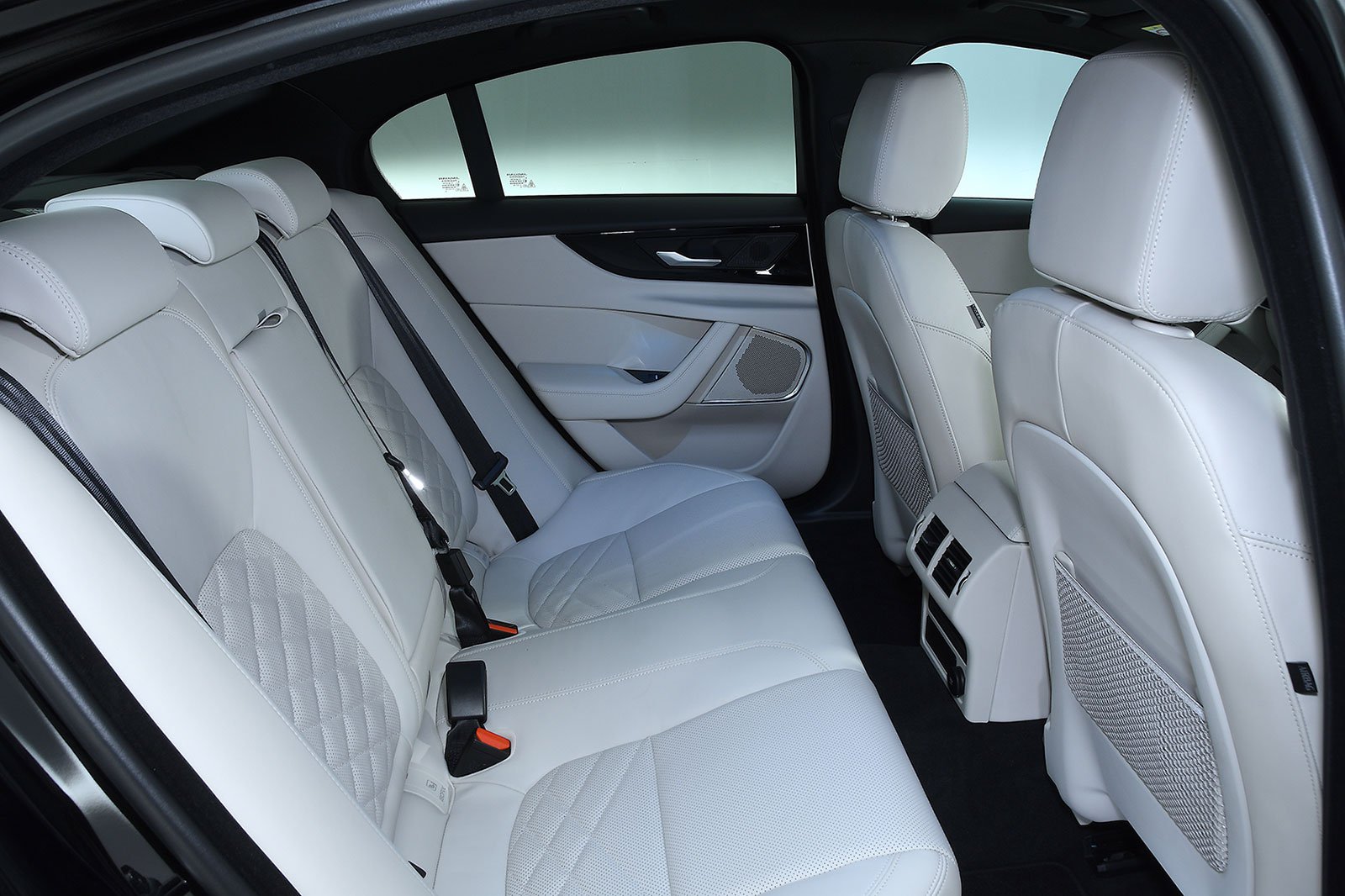 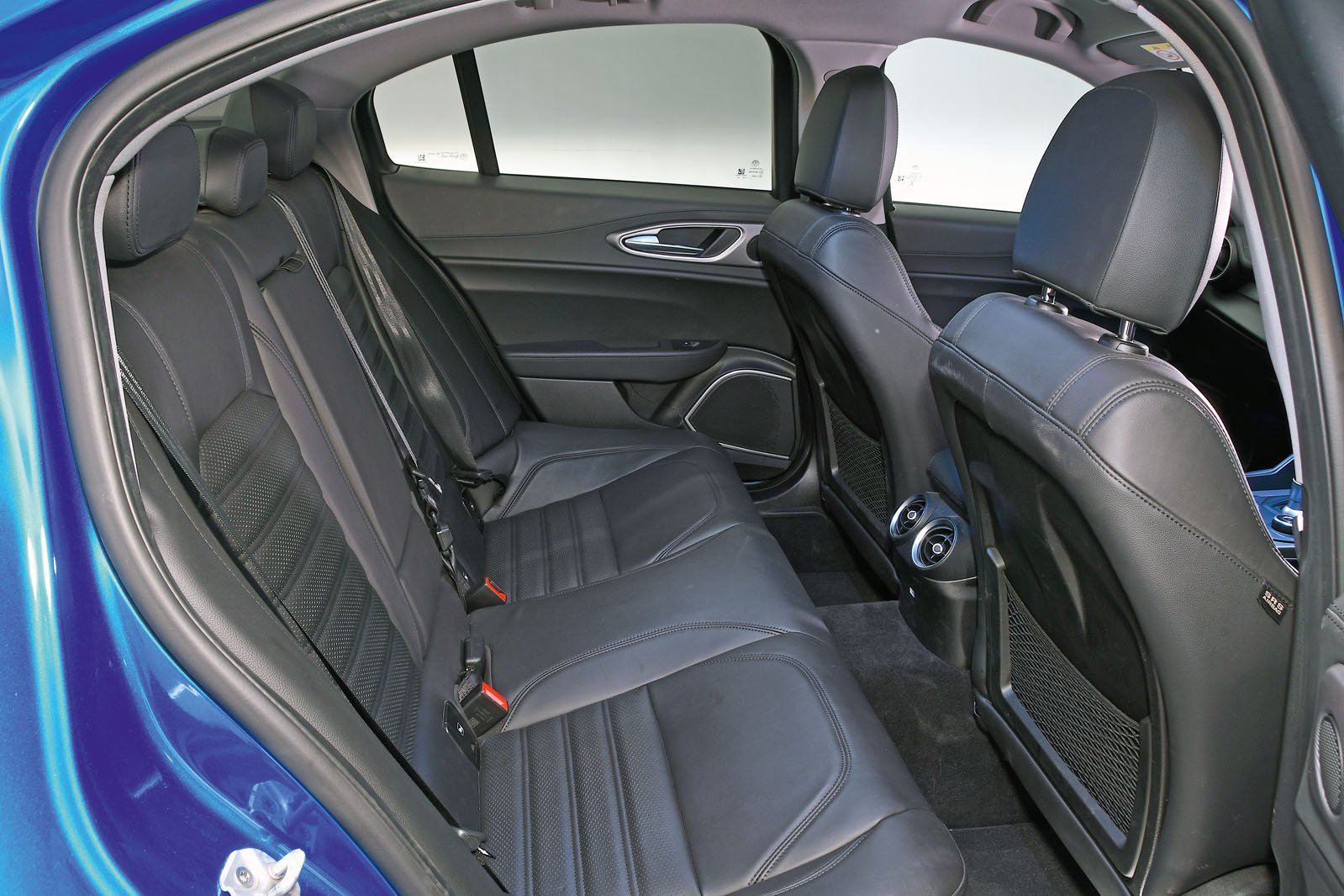 There's a little more clearance for your head in the Giulia, and an extra 60mm of leg room to stretch out in. Both have a significant central tunnel that gets in the way of the middle seat occupant and neither is wide enough to accept three adults across in comfort over long distances, but that's the same for most executive cars.

If you happen to be packing for a holiday, take the Alfa Romeo Giulia because we were able to fit an additional suitcase in the boot of it. What's more, Veloce models get a standard 40:20:40 split-folding rear seat to help you transport longer items. If you want to do the same in the Jaguar XE you'll need to spend £440 for the split-folding arrangement. This does at least include heated rear seats in that price.