More for you |
Every 5-star car on What Car?Used test: Maserati Levante vs Porsche MacanNew issue of What Car? magazine on sale nowMost and least reliable small SUVsRevealed: the car makers whose discounts have got bigger since lockdown
Home
News
New Mercedes SLS AMG Black Series review
news 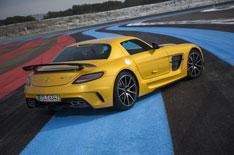 The Mercedes SLS has always been insanely fast, but it's never been quite as agile as featherweight supercar rivals such as the Ferrari 458 Italia and McLaren MP4-12C.

That's where this new Black Series version comes in. It's lower, lighter and more powerful than a regular SLS, which should help improve handling as well as making the gullwing Merc even faster in a straight line.

What's the 2013 Mercedes SLS AMG Black Series like to drive?
The Black Series uses the same 6.2-litre V8 engine as the regular SLS, but thanks to strengthened components including modified camshafts and redesigned valves it's able to rev harder.

Whereas the regular SLS can rev to 7200rpm, the Black Series keeps pulling until 8000rpm, and this helps it produce a mighty 622bhp (59bhp more than the standard car).

A lightweight titanium exhaust means the Black Series sounds even more thunderous than the regular SLS, too; it produces a near-deafening bellow under hard acceleration.

Other lightweight components including a carbonfibre bonnet and torque tube have helped reduce overall weight by 70kg and this (along with the extra power) has cut the 0-62mph time to just 3.6 seconds (down from 3.8 seconds).

We were only able to test the car on a super-smooth racetrack in France, but here the Black Series handled quick changes of direction much better than a regular SLS. It was also able to get its power down more effectively out of slow corners, thanks no doubt to its wider track and sophisticated new electronic traction system.

What we can't tell you yet is how comfortable the Black Series is, because even the most hardcore supercars spend most of their time on bumpy public roads.

What's the 2013 Mercedes SLS AMG Black Series like inside?
The interior of the regular SLS is a bit of a letdown it isn't much more stylish or special than those of most other Mercs. In fact, many of the switches and buttons are similar and look like they've been borrowed from a 30k C-Class.

This holds true for the Black Series, although the swathes of Alcantara and AMG bucket seats do at least make it feel a bit more special.

There's a choice of two colour schemes: pure anthracite or anthracite and red. On the two-tone version, there's some red detailing around the centre console, above the glovebox and on the insides of the doors.

Like the regular SLS, the Black Series is pretty sensible by supercar standards, with a comfortable driving position, clear displays and even a few cubbyholes around the cabin.

Those super-stylish gullwing doors are a talking point, but they're awkward to close if you're of average height or below they also reduce headroom. The small boot dictates that you travel light, too.

Should I buy one?
Big question marks remain over how easy the Black Series will be to live with in the UK. Even the regular SLS is pretty firm, and this hardcore version will undoubtedly be even more unforgiving on bumpy roads.

All we can well you right now is that on a smooth racetrack, the Black Series is seriously capable, and it looks and sounds as outlandish as any true supercar should.