* Sneak preview of new car * Cost-efficiency over style * No photos allowed, though... 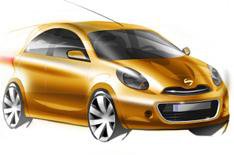 Nissan has given a sneak preview of the next Micra supermini at its headquarters in Yokohama, but no pictures have been released.

The new Micra will be launched in the UK next autumn and will be built on an all-new platform that Nissan calls its V platform.

The V platform will also form the basis of at least two further cars a mini MPV and a small saloon. Nissan won't confirm yet if and when the UK will get these other bodystyles.

The new Micra is bigger than the model it replaces, but is more than 50kg lighter. It will come with an all new three cylinder engine and a new CVT gearbox, although Nissan didn't reveal further technical details on the powertrains.

Journalists at the preview weren't allowed to take pictures of the Micra, but the car's design is a lot more conservative than the current model is and doesn't have the radical design elements from cars such as the Qashqai, the new 370Z sports car or forthcoming baby Qashqai based on the Qazana concept car.

Costs over style
The firm plans to sell one million cars a year, all made from the V platform in more than 150 countries so the need for versatility and to keep costs down were more important than a radical design. It's no Ford Fiesta to look at.

However, Nissan says UK customers of the new Micra are most likely to be owners of the current model. The car based on the Qazana concept is the one more likely to rival the likes of the Ford Fiesta or the DS models from Citroen, in terms of design at least.

One unusual design feature, on first glance, is the two 'U' shapes on the car's roof. However the original chief engineer for the V platform, Noritaka Tsuru, explained that this wasn't a car designer's whim.

'The shapes on the roof were requested by an engineer,' he explained. 'They help reduce vibration and noise in the cabin.'

Nissan says the new car will be very fuel efficient, but would not be drawn if that would mean the car would have engine stop-start technology, or whether a hybrid version would be made, but conceded that this might be possible.

The current model is made in Sunderland, but as that factory gears up to make the Qazana which should go on sale around the same time as the new Micra production of European-bound Micras will switch to Nissan's new factory in Chennai, India.