Is the all-new Volkswagen Golf GTI the best hot hatch you can buy? To find out we're pitting it against our current champion, the Honda Civic Type R...

Ask almost anyone with an interest in cars to describe the Volkswagen Golf GTI hot hatch in three words or less and you’re likely to hear some combination of the following phrases: ‘iconic’, ‘genre-defining’ and the ‘ultimate all-rounder’. And indeed, all of those are perfectly accurate descriptions of a model that, since it was first introduced in 1976, has gone on to establish what is arguably the definitive formula for the go-faster family car.

What you probably won't hear used to describe recent versions, however, are words such as ‘thrilling’ and ‘exhilarating’, and that’s perhaps because Volkswagen wants the GTI to be all things to all people. It’s the Coldplay of hot hatches, if you will: pleasant, popular and just as appealing to your mum as it is to you.

In many ways this approach has worked well, leading to more than 2.3 million examples being sold so far. But in the past few years brands such as Ford, Honda and Renault have been busily releasing models that are just as practical as the Golf GTI but, crucially, more involving to drive. In response, the latest model has been made sportier than ever, or, as Volkswagen’s technical chief puts it, more of a “true GTI”. But what does that mean, exactly? 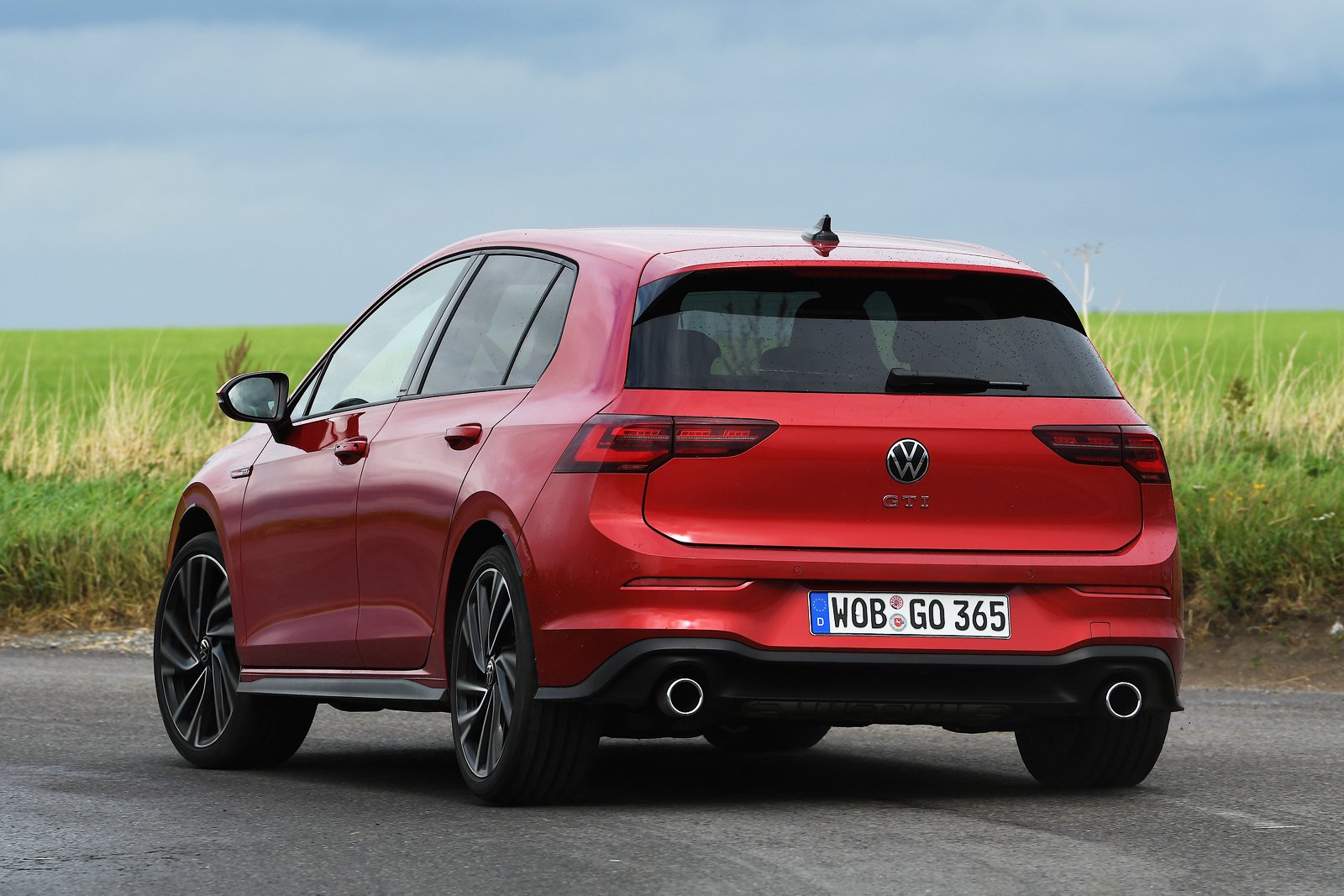 Well, for starters, Volkswagen has pushed the boundaries a little farther than before where styling is concerned; witness the gaping front honeycomb grille and illuminated LED light bar. But then you spot details such as the restrained alloy wheels and tiny roof spoiler and you’re instantly reminded that Volkswagen isn’t a brand that likes to risk alienating its customers. This is still a subtle hot hatch.

And it would appear that an equally cautious approach has been taken when it comes to the mechanicals. This GTI uses an evolution of the brand’s proven 2.0-litre turbocharged petrol engine, with power up by 14bhp – matching the 242bhp of the outgoing Performance model. There’s also a standard-fit limited-slip differential to help boost traction out of corners and an all-new adaptive suspension system. Promising developments, but not exactly revolutionary.

So, are those changes enough to keep the GTI relevant in a world of 300bhp-plus hot hatches? To find out, we’ve lined it up against the latest version of our reigning Hot Hatch of the Year: the 316bhp Honda Civic Type R. It, too, has had some changes for 2020, including, but not limited to, tweaked suspension, better cooling, all-new brakes and some choice interior revisions. There wasn’t a lot wrong with the existing Type R, so the GTI is going to have to be great to beat this new one. 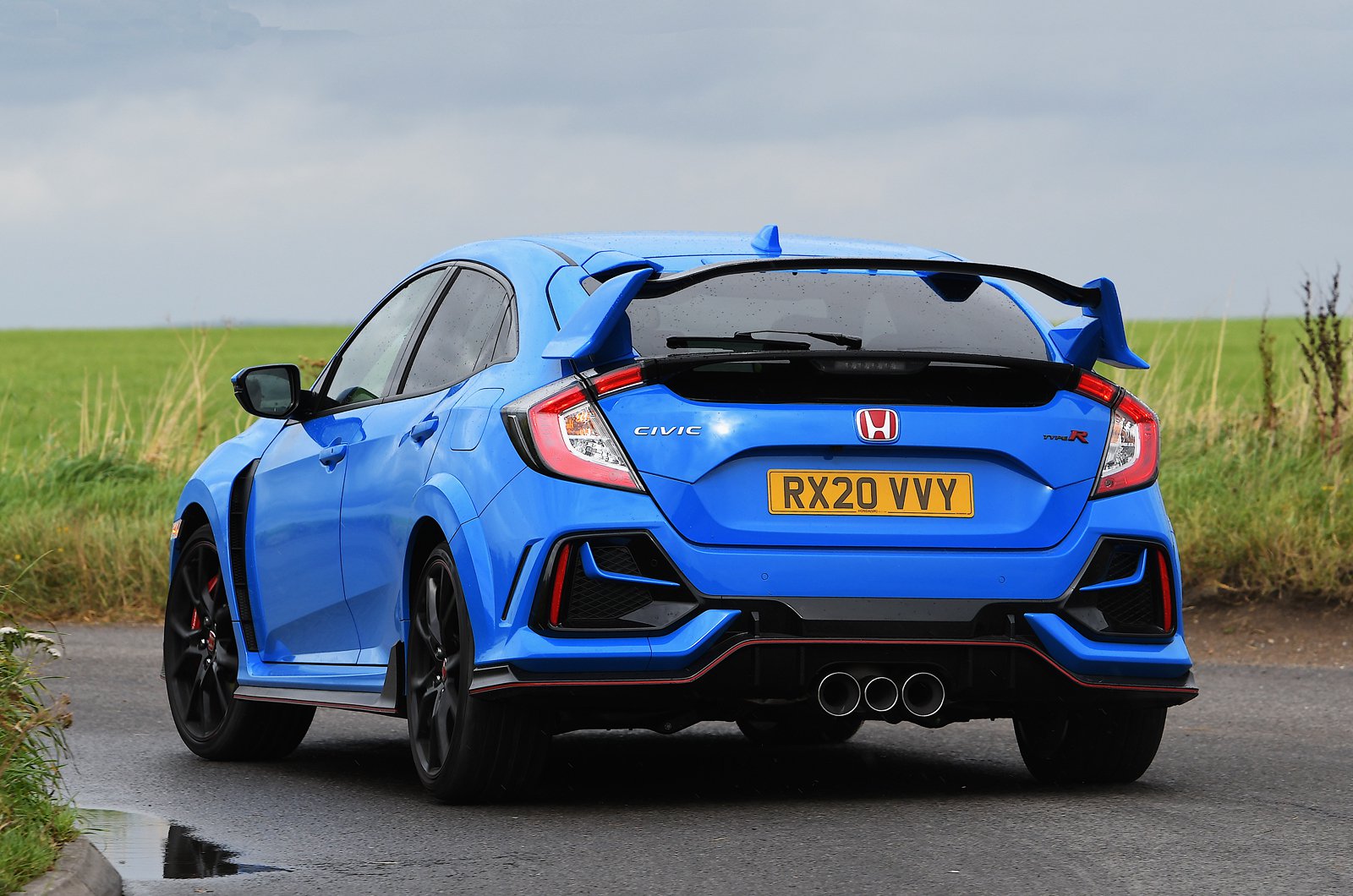 Right, let’s get down to the nitty-gritty of performance first. Putting their power down through the front wheels, both cars offer punchy acceleration, but despite the fact that the Type R has a 74bhp power advantage, the difference isn’t as great as you might expect; it completes the 0-60mph dash in 5.8sec, compared with the GTI’s 6.2sec.

One of the reasons why the two cars are so close in terms of acceleration is that the GTI’s engine is more linear in its power delivery, making it a little easier to get off the line. The Type R has less low-down grunt, with its maximum arriving 500rpm later than in the GTI – but that actually makes it the more entertaining engine on the road. 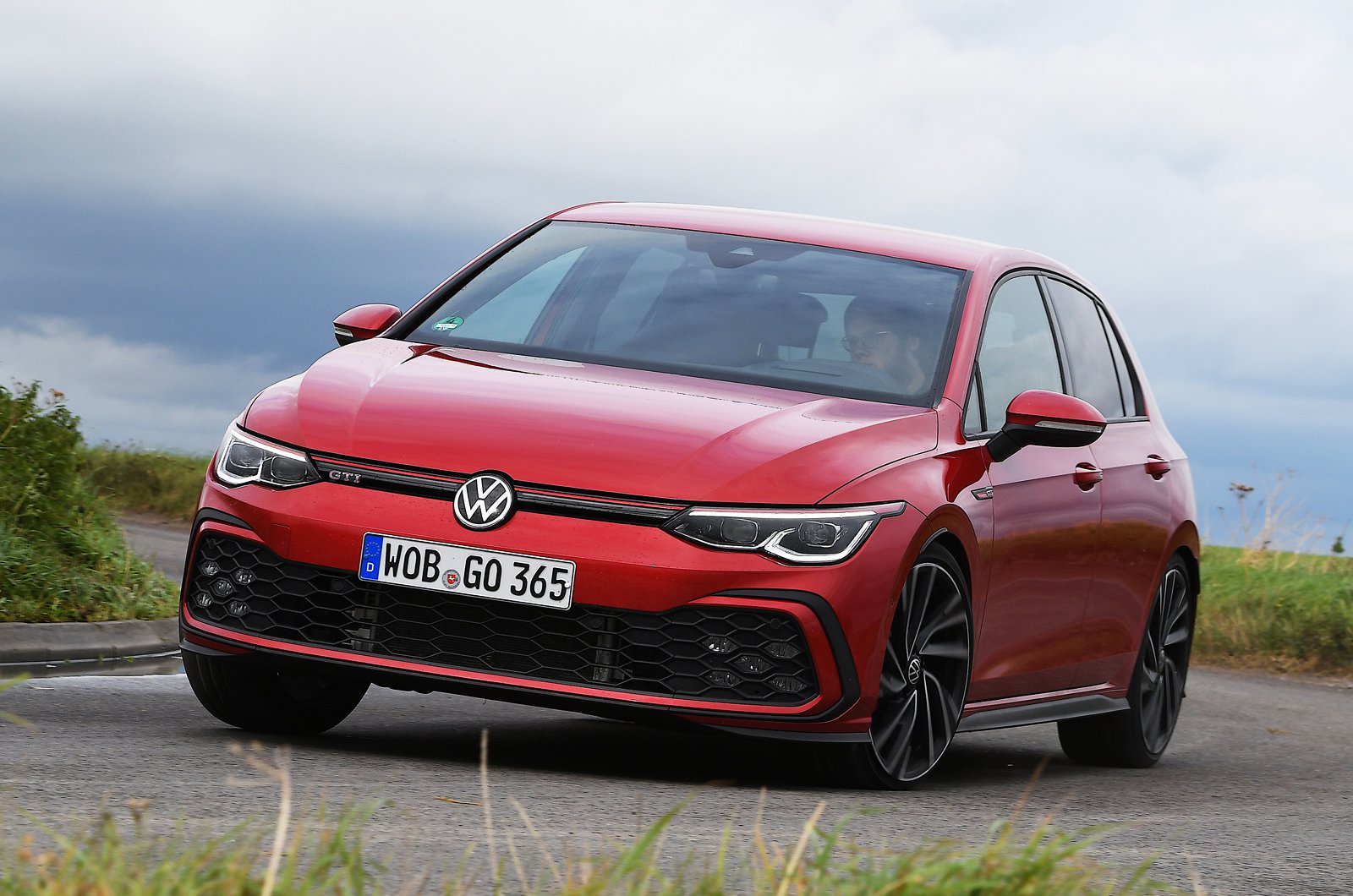 The GTI can be had with either a six-speed manual or seven-speed dual-clutch automatic gearbox. While the former (fitted to our test car) has a shorter action than you’ll find in a regular Golf, it still feels a little too rubbery and indirect – a situation not helped by a square, awkwardly shaped gear knob. Conversely, the Type R can be had only with a six-speed manual, but trust us, you wouldn’t want anything else. As part of the 2020 facelift, Honda has reprofiled and carefully weighted the aluminium knob, and this makes for an even sweeter shift action. It’s about as tactile as it gets this side of a Porsche Cayman GT4 and has you rowing up and down the ’box just for the hell of it.

The Type R’s engine sounds better than the slightly gravelly GTI’s when you work it hard, which is great when you’re driving enthusiastically on your favourite country road. But at a cruise on the motorway, the Type R’s engine thrums away quite boisterously, whereas the GTI’s is relatively hushed. Wind noise and, in particular, road noise are much more noticeable at high speeds in the Type R, too.

Things are more evenly matched around town – especially when it comes to ride quality. In the GTI, you can either control the new adaptive suspension through a dashboard button, which cycles through fixed settings such as Comfort and Sport, or, you can tailor the ride using a sliding scale in Individual mode; you can go south of Comfort for maximum pliancy, or north of Sport if you want to hit the track. In the former mode, the GTI is fractionally more compliant than the Type R, but both cars are very comfortable by hot hatch standards. 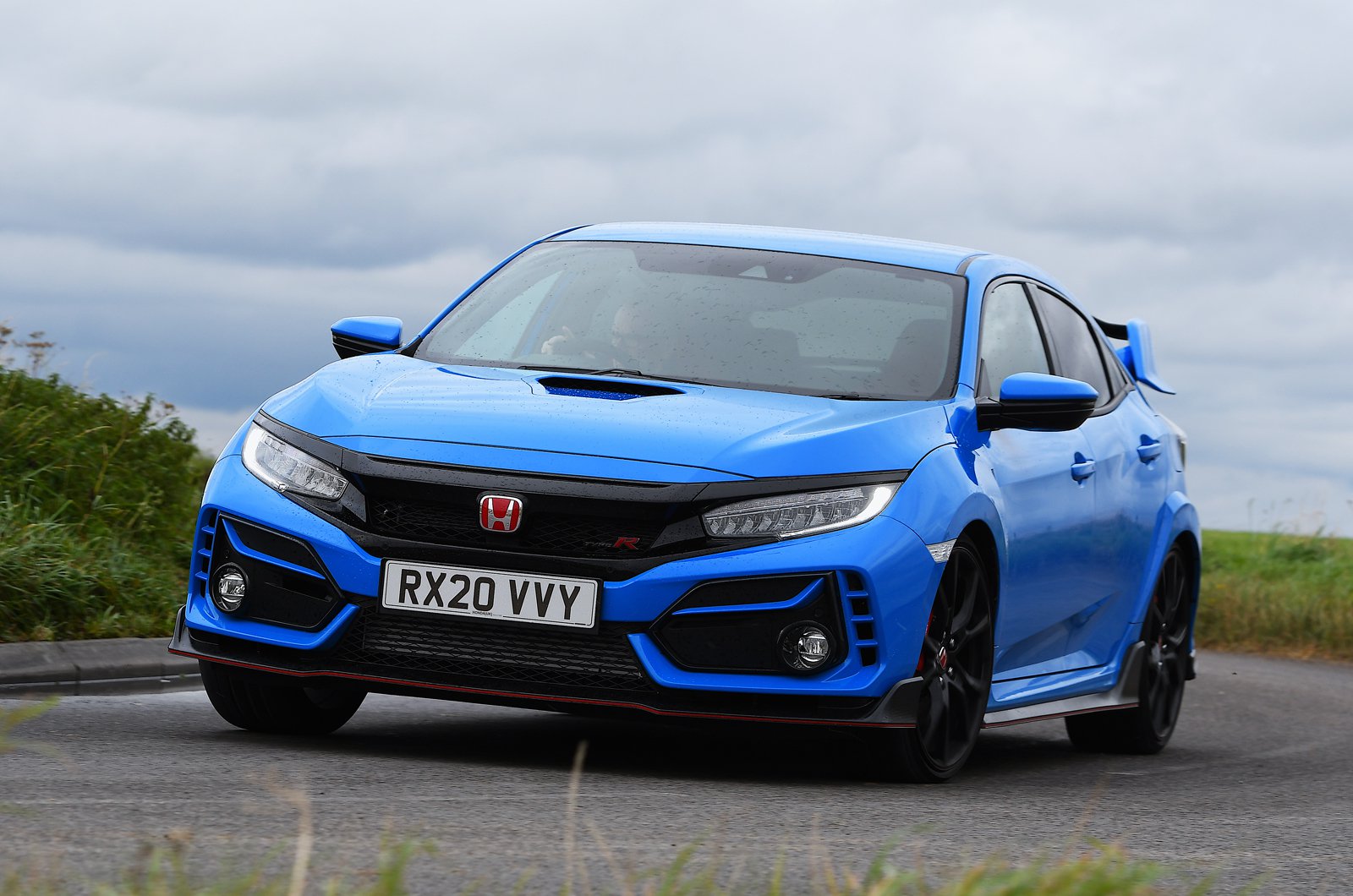 Ramp the suspension up to Sport mode in both of our contenders, however, and the Type R finds a slightly better compromise between ride quality and body control, with the suspension remaining pliant enough to ensure you’re not kicked out of your seat over sudden troughs and crests, while containing body lean better than the GTI's. This gives the Type R incredible stability, which in turn imbues you with massive confidence to push harder.

That’s not to say the GTI is miles behind the Type R when it comes to handling. There’s buckets of grip and a neutral handling balance that allows you to tailor your line with a brief lift of the accelerator. You can even alter it from neutral to more playfully loose at the rear by fiddling with the adjustable suspension’s numerous settings – a first for a GTI.

But ultimately, the GTI’s steering isn’t quite as feelsome as the Type R’s, the GTI is less stable under braking (the Type R’s racing-inspired brakes have an even more positive initial bite and feel far more progressive) and its electronic differential doesn’t pull you out of corners as aggressively as the Type R’s mechanical one. All of this means you feel more comfortable driving the Type R fast – and this is reflected in its lap time around our 0.9-mile test track, which is designed to simulate a meandering B-road. Here, the Type R was more than a second quicker than the GTI – although it’s worth pointing out that the latter was 0.3sec quicker than the old GTI TCR, a hardcore version of the previous-generation model.