With such an illustrious forebear, can the new Porsche 718 Cayman GT4 live up to expectations?...

Why is the Porsche 718 Cayman GT4 so special? For a couple of reasons. The previous model was lauded as one of the great road-going Porsches; we know this because while most cars plummet in value like the pound on Black Wednesday, such was the desire to own the previous GT4 — and the limited number available — that the minute you took delivery, it piled on the pounds like a pre-hibernating bear force-feeding itself Big Macs.

The second reason is that, while the rest of the Cayman range has coarse and grumbly flat four turbocharged engines, the GT4 reunites the Cayman with some old-school charm: a naturally aspirated flat six. And if you aren't shouting “hurrah!” to that, some might say you have a cold heart.

Don’t mistake old-school charm to mean old-hat, though. This engine is thoroughly contemporary – an enlarged version of the current 911’s motor that has been completely reworked within. Here, minus the turbos, it produces 414bhp and 310lb ft of torque.

To keep it in line with current and future emissions regulations, it’s fitted with a particulate filter and cylinder deactivation — the former collects soot, essentially, while the latter means the engine can run with only three cylinders on a light throttle to save fuel. As a result, the GT4 is claimed to do 25.7mpg and emit 249 g/km of CO2. That won’t have Green Party members jumping to buy one, but it’s passable for a hardcore sports car.

But you don’t want to know how efficient it is, rather how quick it is, right? The answer is 'very'. It'll rattle off 0-62mph in 4.4sec and hit a top speed of 187mph. And to help it carry more speed through corners, it follows its predecessor in having an enormous – but even more efficient – rear wing along with other clever aerodynamic aids, including a rear diffuser. Everything is functional, not floral, helping to create downforce that squishes the GT4’s bespoke Michelin tyres into the ground for maximum grip.

The suspension comes from the more expensive 911 GT3, with switchable adaptive dampers fitted as standard, plus there are enlarged brakes. These can be upgraded for an extra £6000 or so to lightweight carbon-ceramic discs. 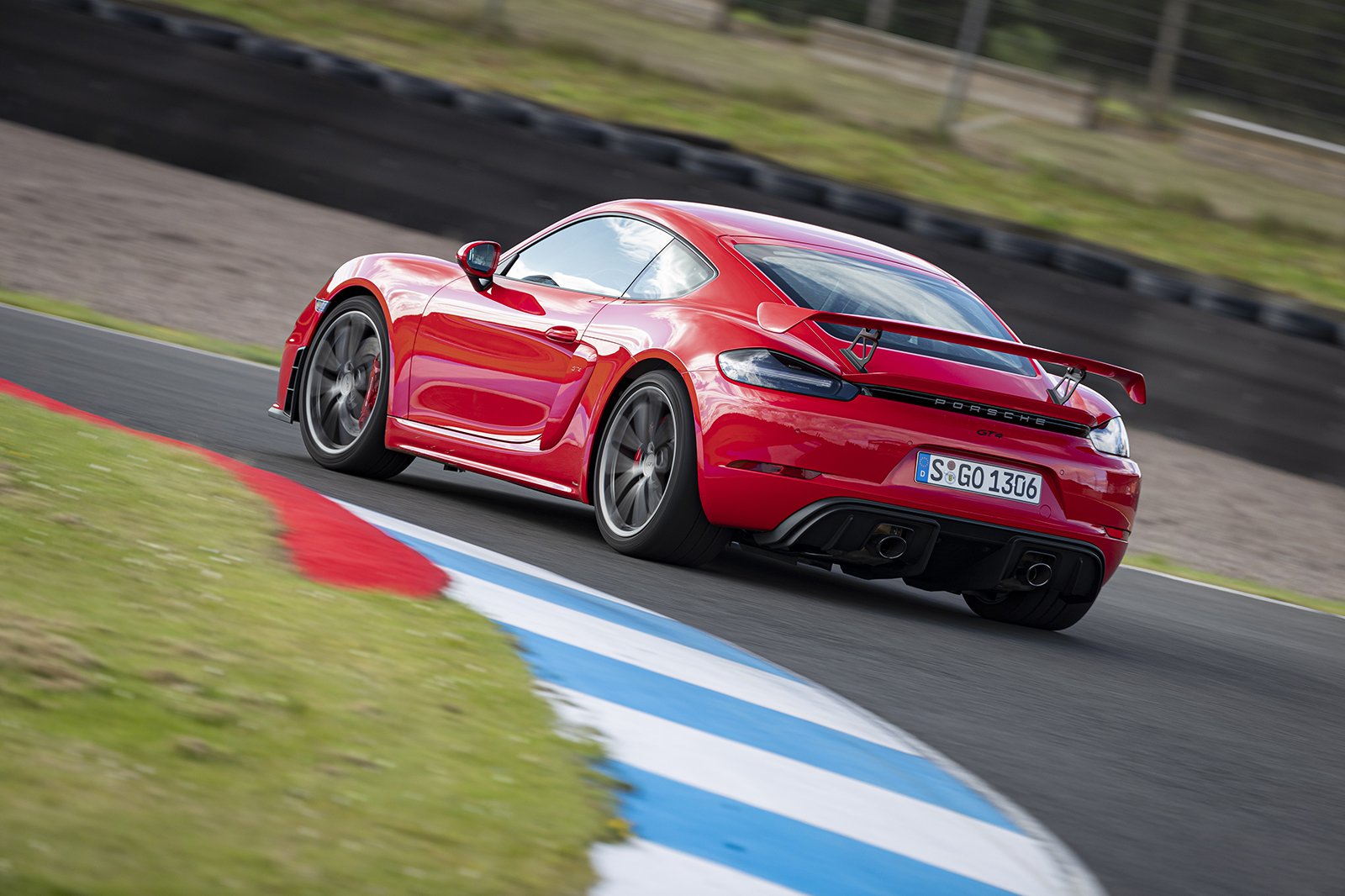 So far, we’ve driven the GT4 only on track, but as it’s intended to be a road car for track day enthusiasts, that’s perhaps no bad thing. What’s it like? Rather like the old GT4, to be honest. But before you start thinking that’s an immediate negative, it isn’t. That car was simply stunning to drive, and the fact that the new GT4 retains its pedigree DNA with a smattering of extra grunt and grip is all that we might have hoped for. It’s gladly received.

And let’s not forget what a joy it is to have a flat six back in the middle of a Cayman. The minute you fire it up, there’s none of the standard car’s Beetle-like putt-putting; instead, even at tickover, the noise is enough to tickle the fancy of car connoisseurs. There's no doubt this howling, high-revving engine is far more tuneful than that of our current favourite sports car, the Alpine A110, and even the six-cylinder BMW M2 Competition.

When you snick first gear, you realise that the GT4’s gearlever has a shortened throw compared to the regular Cayman's, for a quicker change, but it retains the precision that makes a good manual gearbox an anachronistic joy. It provides more interaction, and yes the clutch pedal is meaty, but so what? Even if, as mooted, a dual-clutch automatic option will follow, the six-speed manual is the right choice for a car like this.

It’s fast, of course, but not so fast that it's redundant for the road. The same long gearing as the previous GT4 makes you work the engine above 4000rpm to get the best service, but the way it revs onwards to 8000rpm, with such a sweet song, makes that no hardship. The only measured quibble is this new engine still doesn’t zing with the banzai exuberance of the 911 GT3’s, but that's fine; it gives those with deeper pockets at least one reason to wait for the next incarnation of the GT3, which will be along within a couple of years.

Our GT4 had the optional carbon-ceramic brakes fitted, and they shed speed unfailingly. The pedal is firm and positive but, like the clutch to the left, the middle pedal requires more effort than is usual to get the brakes biting hard. Again, though, more effort somehow equals more enjoyment in the GT4.

The steering isn’t overly heavy, mind you. It’s all about progression, with the weight building naturally through the corner and always keeping you keyed into what the front wheels are doing. The alcantara wheel also adds the perfect tactile accompaniment to the steering’s innate delicacy.

And the GT4 can carry some serious speed with the amount of grip offered by its bespoke tyres (far more than the A110), but it’s not intimidating in any way. You need to respect it, naturally, but it's exquisitely balanced front to rear and hugely rewarding to push hard. The more you listen to the GT4’s messages percolating up from beneath your backside, the faster you go. It’s that simple. 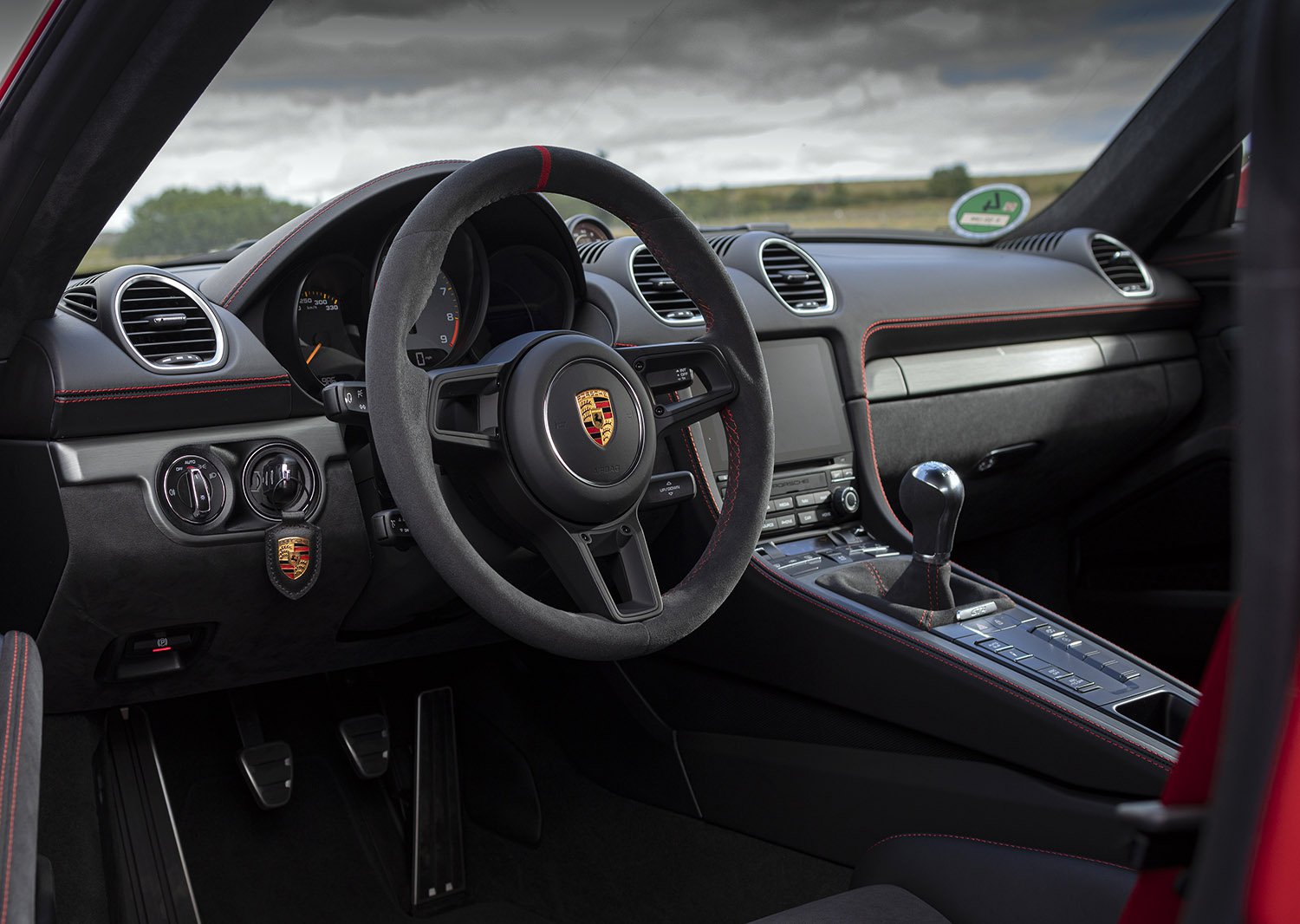 Because the GT4 is derived from the regular Cayman, it shares many of that car's excellent qualities. The driving position, for instance, which is pretty much spot on. It’s low (our car had the optional bucket seats, but you still get height adjustment) and puts your legs stretched out to meet the perfectly placed pedals. The steering wheel is in line with both and equipped with an extensive adjustable reach and height range.

And this isn't a sports car fit for jockeys only. You'll fit even if you're 6ft 3in tall and, along with your identical twin sat beside to you, be blessed with plenty of head and leg room.

Of course, being a two-seater means the GT4 has no room for anyone else, but it does have two boots: a deep one in the front and a shallower but wider one in the rear. Neither will fit golf clubs, but there’s enough space for several soft weekend bags.

What marks the interior out as unique to the GT4? Not much. It feels spartan, in an appealing way for a focused machine. You can elect to make it even more dedicated to the track by deleting the infotainment system — supposedly to save weight — and adding the optional Clubsport Package. This features a rear roll cage, a fire extinguisher and a six-point racing harness for the driver instead of a regular seatbelt.

If you want a bit more detail on the space available or wonder what the infotainment system is like, our full Porsche 718 Cayman review has all you need to know. Or to see how much you could save on a Cayman without any haggling, check out our New Car Buying service.