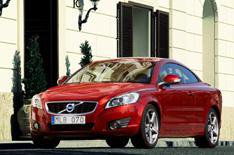 This is Volvo's updated C70.

There are widespread cosmetic changes for the 2010-model-year coupe/convertible, which will be unveiled at the Frankfurt motor show later this month.

A new look
The C70 has been given a major face-lift, with an all-new front end that shows the influence of Volvo's S60 concept car. There are also new door mirrors, a redesigned rear bumper and new LED rear lights.

Interior changes include a new, wider instrument panel and upgraded materials for a classier look. There's softer leather upholstery, too.

Prices for the new Volvo C70 have yet to be announced, but we expect a small increase over the current car's. Customer deliveries begin in early 2010.