More for you |
Most and least reliable small SUVsRevealed: the car makers whose discounts have got bigger since lockdownHyundai Ioniq Electric long-term test reviewTop 10 used MPVs for less than £10,000What Car?'s best hot hatches 2020 (and the ones to avoid)
Home
News
Nissan affected by volcanic ash
news 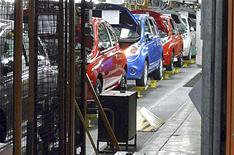 Nissan is to stop building three of its models in Japan tomorrow because the cloud of volcanic ash has prevented parts reaching its factories.

It has been unable to obtain air pressure sensors from the Irish Republic, which means it has had to suspend building its Cube, Murano and Rogue models.

Two production lines will be closed at its Oppama plant in Yokosuka, and both lines at its Kyushu factory, leading to a delay in building 2000 vehicles.

Nissan has not yet decided whether it will have to suspend production for Thursday and beyond.