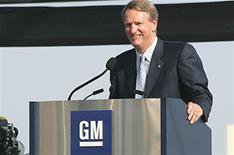 Wagoner has been replaced by Fritz Henderson, who was previously the company's president and chief operating officer.

GM has already received nearly $10 billion (around 7 billion) from the US Government, to help it through the global recession, in the wake of systemic operating losses.

Wagoner was asked to stand aside by the Obama administration as a pre-condition of possible further financial support for GM.

'I was in Washington for a meeting with Administration officials,' said Wagoner. 'In the course of that meeting, they requested that I "step aside" as CEO of GM, and so I have.'

The firm said it had removed Streiff because of the "extraordinary difficulties" the motor industry faces.