Petrol costs the same as diesel 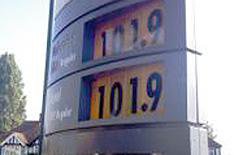 UK petrol stations are selling unleaded petrol for the same price as diesel.

According to petrolprices.com, the national average price of a litre of unleaded is 103.8p, while diesel costs 105.4p. However, some petrol stations in places as far apart as Bristol, south-west London and Scotland are selling the two fuels for the same price and in a handful diesel is cheaper than unleaded.

'We've been noticing a trend of narrowing that gap [between petrol and diesel]', said a spokesman for Experian Catalist, a company that gathers forecourt price data. 'Now we're seeing sites selling the fuels for the same price, and in some cases where unleaded is more expensive than diesel.'

Last year, unleaded petrol cost up to 15p less per litre than diesel, but as the price of unleaded petrol traditionally increases worldwide in the summer the so-called driving season in the USA this year's spike has caused the gap between the two fuels to close and even reverse.

Is now the time to buy a diesel car?
Fuel prices fluctuate greatly, and the price of diesel is expected to spike in the winter months as it is similar to fuel used for heating.

Diesel cars are more expensive to buy than their petrol counterparts, so do your sums very carefully. This premium tends to have a greater effect than the actual price of fuel and, as a general rule, you have to drive many miles in a diesel to offset this initial cost.