More for you |
Every 5-star car on What Car?Used test: Maserati Levante vs Porsche MacanNew issue of What Car? magazine on sale nowMost and least reliable small SUVsRevealed: the car makers whose discounts have got bigger since lockdown
Home
News
Peugeot BB1
news 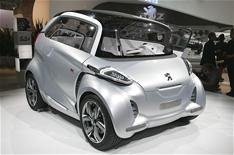 Despite futuristic looks that would usually consign it to the 'never-to-be-made' file, Peugeot has confirmed to What Car? that a production version will be made and, while it won't look exactly like the concept car, the company says it will retain its 2+2 layout and its reverse-opening doors.

How does it work?
The BB1 is just 2.5 metres long and weighs just 600 kilos. It is powered by two electric motors mounted on the rear axles, which together produce 19bhp.

Despite being low-powered, the BB1 can reach city cruising speeds of 20mph in just 2.8 seconds and has a range of up to 75 miles.

Is it a car, though?
Good question! There are no pedals and no steering wheel, it has 'handle bars' that would look more at home on one of Peugeot's mopeds, while it also has a tubular chassis designed by Peugeot motorcycles, too. Hmm...

With four wheels, doors and a roof, it does exhibit some car-like symptoms, though, but it will be classed as a quadrocycle. Rear passengers travel pillion-style by straddling the back seat.

There are solar panels on the car's roof that help power some of the BB1's functions.