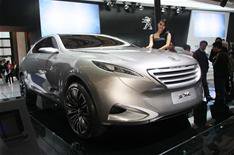 Peugeot has unveiled its SxC crossover concept car at the Shanghai motor show.

The sporty-looking upmarket car gives some general ideas on how Peugeot design will evolve over the coming years. It could either preview a potential bigger brother to the 4007 or signal how the replacement for that car could look.

The Outlander-based 4007 will probably remain in production until at least 2014.

For the moment the SxC is firmly in concept car territory with 22-inch wheels, rear-hinged rear doors and pillarless design.

The hybrid powertrain is a little more down to earth: a 218bhp 1.6-lire petrol powers the front wheels and a 95bhp electric motor drives the rear wheels.

Besides the ability to operate in four-wheel drive, the SxC can also drive in fully electric mode at low speed. Despite sporty performance from the total output of 313bhp, Peugeot says the SxC promises fuel economy of 48.7mpg and emissions of 143g/km.