* New 'mobility service' from Peugeot * Rent a bike, a scooter, a car or a van * London and Bristol in six-month pilot... 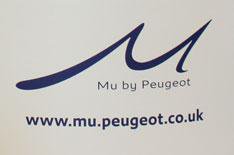 The scheme is running now at Robins and Day dealerships in London and Bristol, and will allow any customer, not just existing Peugeot owners, to rent everything from the manufacturer's broad range of vehicles, including bikes, scooters, cars and vans.

Customers need to register their details online before buying points to rent vehicles as well as accessories such as roof boxes and bike racks. Peugeot is offering everything from its new Mitsubishi iMiEV-based iOn electric car to the sporty RCZ coupe or seven-seater 5008 MPV.

Mileage on the scheme is unlimited, although it is only open to drivers over the age of 21. More powerful cars on the scheme are restricted to licence holders over 25 and with fewer than six points on the licence.

Vehicles can be pre-booked, but have to be picked up and dropped back at the same dealership. Peugeot is looking to increase the number of UK sites running the scheme next year, if the pilot is successful, and allowing points bought in the UK to be used in different European countries.

Peugeot will monitor demand with the aim of ensuring customers aren't disappointed by the unavailability of popular cars at peak times like weekends. The RCZ in Paris, for instance, is booked solid, possible evidence that there aren't enough to meet the appetite for the coupe in that country.

Peugeot's UK managing director John Goodman said: 'We have to be honest, this is a genuine pilot. We have to live with it for six months to see how it works.'

Peugeot hopes the Mu scheme will appeal to customers more than car clubs since the condition of vehicles will not be left to chance, as can be the case with car clubs, and all will be less than six months old. They company also hopes customers will prefer knowing exactly which vehicle they are getting, something traditional rental services can't always provide.