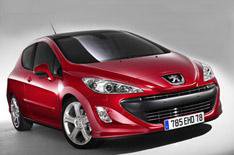 Powered by a turbocharged 1.6-litre engine, and using a six-speed manual gearbox, the car manages 0-62mph in 8.3sec and has a top speed of 140mph.

Styling upgrades over lesser 308s include a rear spoiler and lower front bumper. The suspension has been lowered, too.

Inside, there's an aluminium gear knob and pedals, as well as a different steering wheel design.

The car will be shown at the Geneva motor show next month and goes on sale in April. It is expected to cost from 17,000.