More for you |
All the electric cars coming soonHow to spec a Jaguar XEShould I still buy my new electric car? 2021 Suzuki Across large SUV revealed: price, specs and release dateBest used family SUVs for less than £15,000
Home
News
Photos of Prius leaked on internet
news

Photos of Prius leaked on internet 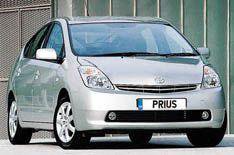 Images of the new Toyota Prius have been leaked on the internet, ahead of the petrol-electric hybrids cars launch in 2009.

The pictures show that Toyota has retained the current versions proportions, but that the new car has been given a smoother, yet more aggressive look.

It is expected that a larger capacity 1.8-litre petrol engine combined with an electric motor, will provide the power. The new car will be capable of more than 70mpg on average, while emissions should be less than 90g/km.

The new Prius will use the current cars nickel hydride battery pack, but could switch to lithium-ion batteries in 2010 if they prove more reliable.