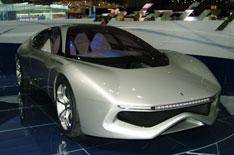 Oh lordy, we need a translator here and not because we're in Switzerland. In such polite company, well restrain ourselves and describe Pininfarina's press release on its Sintesi concept as flowery.

Try this: 'The Sintesi: a synthesis of beauty, sportiness and functionality.'
Which means what, exactly?

In simple terms, it means the car looks good. The design, we're told, combines elements of the company's Birdcage 75th supercar and Nido city vehicle prototypes that have previously been displayed at motor shows.

The car is powered by four fuel cells providing 20kw of power per wheel. Additional battery charge is provided by solar panels and regenerative braking. In Sport mode the batteries provide full power and record a 0-62mph time of 7.5s and top speed of 155mph.

In addition, the car has been designed to sense other cars around it and react to the way they are driven.

However, the company insists that the Sintesi is not a preview of the electric car it has previously announced it is building in partnership with Bollore. That is expected to be an entirely new project that will be unveiled at the 2009 Geneva motor show.