* Thieves seek precious metals * Each converter worth 150 * Can be stolen in six minutes... 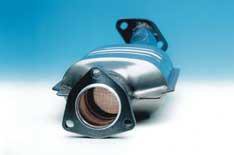 The police have launched an initiative to reduce the number of catalytic converters being stolen.

All modern cars are fitted with catalytic converters to reduce harmful emissions from the engine. However, to achieve this, they are use three precious metals - platinum, palladium and rhodium.

Although only very small amounts of the metals are used in a catalytic converter, the value of these metals has risen by between half and six times in the past two years, making them a target for thieves.

Now the Association of Chief Police Officers of England, Wales and Northern Ireland (ACPO) has teamed up with the British Metals Recycling Association (BMRA) to fight the crime.

Experts say a thief can remove a converter in just six minutes and sell it for up to 150.

Stolen converters are shipped to Poland, Canada, China and Latvia, where the precious metals are extracted.