* Everything you need to know about the new 911 * From show debut to first review * Related Porsche news and reviews... 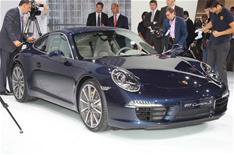 The Porsche 911 is larger, lighter and faster in its latest incarnation, which makes its public debut at Frankfurt.

Everything is new but, as ever, the 911s styling has evolved subtly.

Porsche says that the 911s compact exterior dimensions have been retained, although hasnt released details of the new models dimensions.

The proportions have changed slightly: the wheelbase is 100mm longer, for improved stability and greater interior space, while there are shorter front and rear overhangs and a lower roofline.

At the front, there are familiar round headlights and slim indicator lamps at the top of each air intake. Theres a lower-slung look than before, though; an impression enhanced by a wider front track.

The profile and side windows appear all-but identical to the current cars, but the side mirrors are now mounted on the door, rather than at the front of the windows. The biggest changes are at the rear, with slimmer tail lamps and a wider bootlid that allows for a larger pop-up spoiler.

The new body is stiffer than before and, thanks to the use of more aluminium in its construction, lighter by up to 45kg.

As ever, the 911 has rear-mounted six-cylinder engines. The latest units are more powerful, but also more efficient, with fuel consumption and CO2 emissions for all versions that are up to 16% lower than the current cars. A start-stop system and energy recuperation system now come as standard. Theres also a seven-speed manual gearbox, which Porsche claims is a world first.

The entry-level Carrera model has a 3.4-litre, 345bhp engine, whereas the Carrera S has a 395bhp 3.8. With the optional PDK semi-automatic gearbox the Carrera has CO2 emissions of 194g/km the first 911 with CO2 emissions below 200g/km.

As with its exterior, the 911s cabin isnt a major departure from the current cars. Porsche says that it takes its cue from the Carrera GT, with a design that mixes elements of the current car with Porsches newer models like the Cayenne and Panamera.

Prices
The new Porsche 911 is available to order now, with first customer deliveries expected in mid-December.

The 911 Carrera starts at 71,449 and has standard equipment that includes leather trim, xenon headlights and satellite-navigation.

Porsche is expected to roll out more 911 derivatives, starting in 2012. Four-wheel drive, Cabriolet, Targa and Turbo models are all expected.