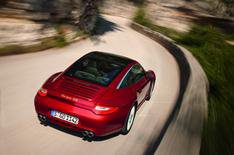 Porsche's new generation 911 will be available in Targa trim, with an electric sliding glass roof.

The roof is 1.5 square metres in total, and slides open beneath the tailgate in seven seconds to leave a 0.45 square metre opening.

As with the standard 911, the engine line-up features direct-injection technology for the first time, which cuts carbon dioxide emissions of the Carrera 3.6 to 225g/km, putting it in Band F for VED road tax. Despite this, power is increased by 20bhp to 345bhp and pulling power is up by 14lb ft to 287lb ft.

The car is available in only four-wheel-drive, although a new traction system will allow all of the car's power to be delivered through the rear wheels.

The new seven-speed, double-clutch transmission, called PDK, is available as an option, lowering CO2 emissions and the 0-62mph time slightly.

UK deliveries will begin from October 25.