There’s a lot of fake news around electric cars. That’s why we’ve found the biggest electric car myths and misconceptions, and brought the facts to bear...

It’s clear that electric cars – such as the Nissan LEAF – are the future. But, for drivers who aren’t familiar with how easy electric cars are to use, the idea of a future where we plug-in-and-play seems anything but simple. That’s why we’ve taken the biggest electric car myths and misconceptions and busted them. Whether it’s range, charging or cost, here are all your electric car questions answered.

For more information on the all-electric Nissan LEAF, head to nissan.co.uk/leaf.

A range of 300 to 800 miles on a tank of fuel is a luxury we’re used to. But electric cars are by no means restrictive. The all-electric Nissan LEAF offers up to 168 miles of range, or up to 239 miles for Nissan LEAF e+ models (WLTP)1. In a LEAF e+ that’s easily enough for a three-hour journey from Bristol to Sheffield – the sort of journey you wouldn’t do without a lunch or coffee break, which gives you easily enough time for a top-up recharge if needed.

It’s also worth re-thinking range. Most everyday journeys are roughly 10-20 miles – especially in urban areas. So, even without topping up at home every night, a typical Nissan LEAF e+ driver doing 10,000 miles a year could easily do a week’s worth of driving on one charge.

We’re used to a quick splash-and-dash of fuel, but electric cars are faster to charge than you think. It’s also worth thinking about how to fit charging around times when your car isn’t moving – whether its wallbox charging slowly and cheaply at home overnight or while you’re at work during the day, or fitting top-up ‘grazing’ on public chargers around activities that take half-an-hour or more, such as shopping, lunch, meetings or hobbies. 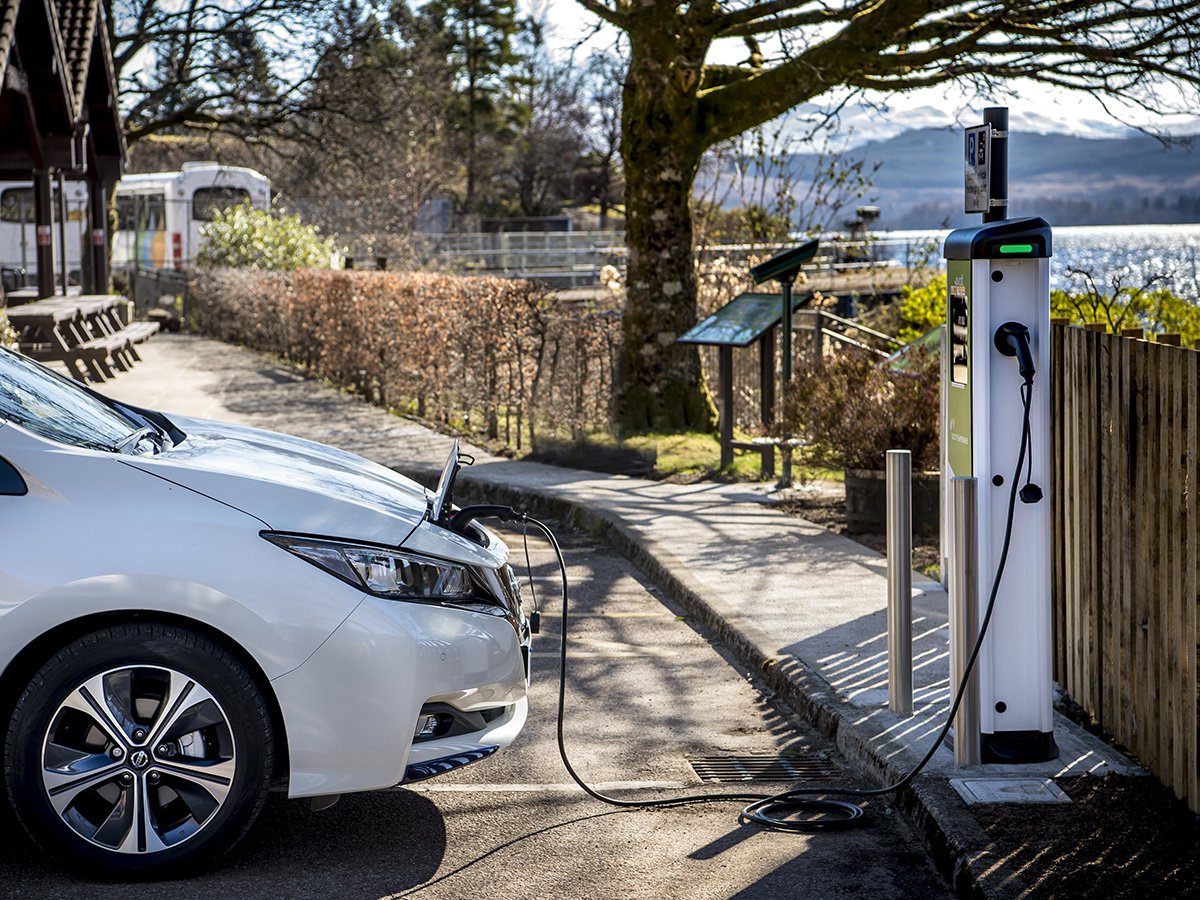 Costs for home chargers vary, but the UK government’s electric vehicle charging scheme grant can cover up to 75% of the costs (up to a maximum of £350 inc. VAT)3. That means a 7kW home charger from Pod Point – which is three times faster than a domestic 3-pin plug – costs as little as £529 to fit. Compare that to the amount of petrol or diesel you buy in a year, and the cost benefits quickly add up.

The UK is preparing for an electric car future with over 32,000 public charging points at over 11,000 locations, and around 500 more charging points added every month. For perspective, there are only 8,385 petrol stations in the UK (down from 18,000 in 1992). The times are clearly changing.

Although electric cars are more expensive than similar petrol or diesel cars, the gap is narrowing – and it’s important to think about whole-life running costs. For example, the Nissan LEAF starts at £26,845 (OTR MRRP inc. UK plug-in grant), while a similarly sized family hatchback costs between £23,000 and £28,000. 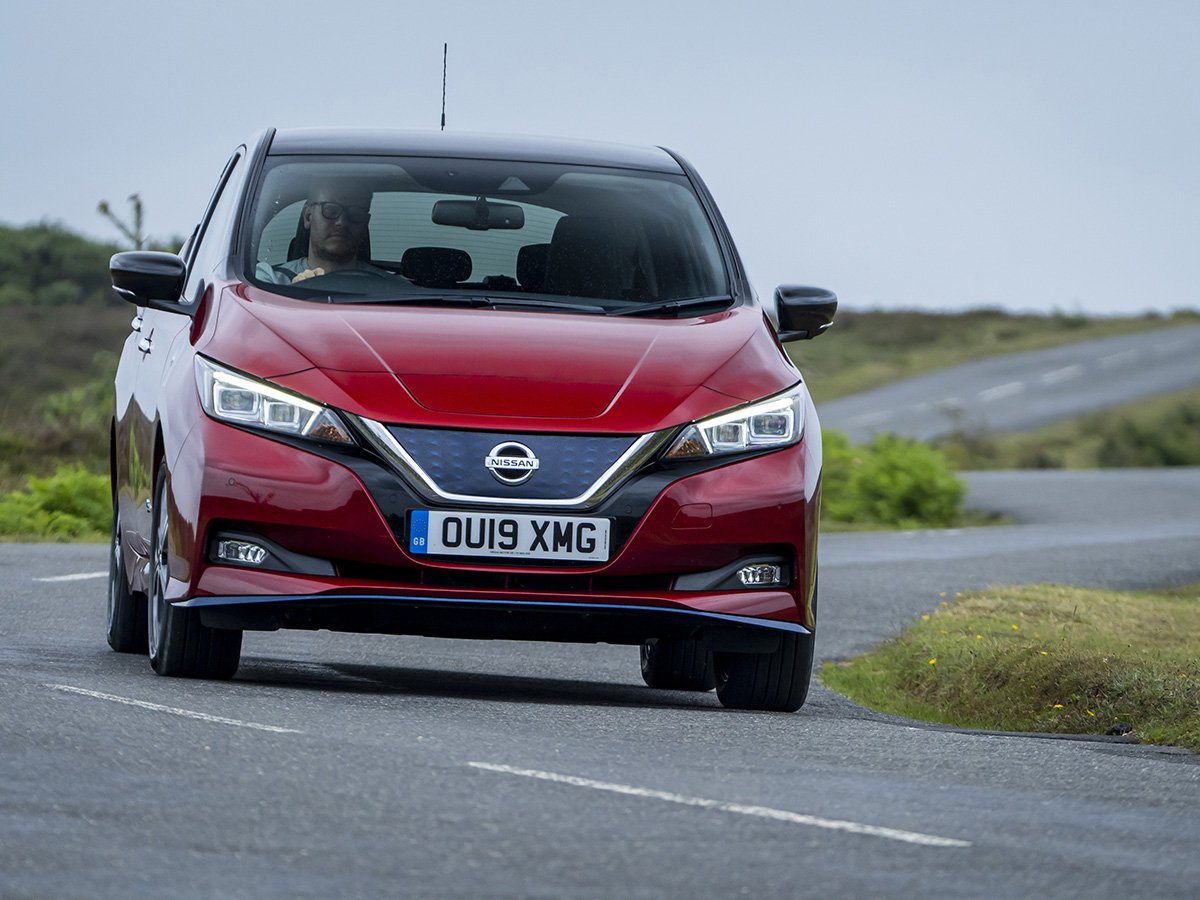 Nissan LEAF e+ models have an impressive 217PS and 340Nm of instant electric torque, delivering 0-62mph in just 6.9sec (around 3sec faster than most family hatchbacks). Impressive mid-range acceleration lets you power from turn to turn with verve, as well as giving you confidence to overtake another car if needed. But not all journeys are on flowing country roads. The Nissan LEAF also makes long journeys and city traffic easier and less stressful thanks to e-Pedal one-pedal driving and advanced Nissan ProPILOT driving aids6 that help with braking, steering and accelerating.

Electric cars actually have fewer moving parts than petrol or diesel cars, so there’s less to service or go wrong. Typical annual service costs for the Nissan LEAF at participating dealers range from £159-£209, compared to £269-£369 for a diesel car at participating Nissan dealers.

While it’s true that batteries lose capacity as they are charged and depleted many times over, new generation lithium-ion batteries are proving much more resilient than expected – losing as little as 10% capacity over 100,000 miles (roughly 12 years of typical UK driving).

You can’t use the air-con or heating

While it’s true that excessive use of the air-conditioning or in-car heating takes range from the battery, it’s just a matter of re-thinking how you use it. The NissanConnect Services app – which can be used on compatible smartphones – lets you remotely pre-heat or pre-cool your Nissan LEAF while it’s recharging, so it’s at the right temperature when you get in it without losing any range before you start your trip8. You can also sync navigation, so you can plan every element of your trip before you leave the comfort of your sofa.

For more information on the all-electric Nissan LEAF, head to nissan.co.uk/leaf.

2. Indicated rapid charging time may vary depending on factors including charging conditions, battery and ambient temperature at point of use and if the battery safeguarding technology is activated. Visit nissan.co.uk to find out more.

6. ProPILOT is an Advanced Driver Assist technology but cannot prevent collisions. ProPILOT is intended for “Eyes on/Hands On” for highways only (road separated by barriers). It is the driver’s responsibility to stay alert, drive safely and be in control of the vehicle at all times. For more information, please refer to the owner’s manual or visit www.nissan.co.uk/techterms

7. Year or mileage (whichever comes first). For full warranty terms and conditions, visit nissan.co.uk or speak to your local dealer.

8. To use NissanConnect services you need a smartphone with compatible iOS or Android operating system. Services subject to mobile network coverage. NissanConnect Services available for an additional charge on subscription after the third year. For further information, please visit www.nissan.co.uk or contact your local Nissan Dealer.