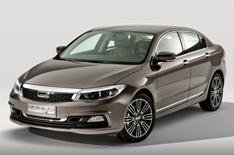 This is the Qoros 3, which will be revealed at the Geneva motor show early next month.

The small family saloon is the Chinese companys first production car and will launch there during the second half of this year. European sales will follow later.

Both engines will come with a six-speed manual transmission as standard, with a dual-clutch semi-automatic box available as an option.

The car maker is hoping to achieve top marks in its domestic crash tests and Euro NCAP for European markets.

Right-hand-drive production has yet to be confirmed, while pricing and performance figures will be released closer to the car going on sale in the second half of the year.

The saloon will be followed by estate and SUV versions, based on the same platform.