* Sales fall by 30% in March * Renewed calls for scrappage scheme * No commitment from Government, yet... 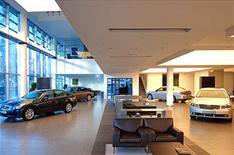 Car sales have fallen by 30% during March, resulting in increased demands for a scrappage scheme to be introduced.

The drop in sales has been described as '"disappointing" by Paul Everitt of the Society of Motoring Manufacturers and Traders (SMMT).

He also renewed the SMMT's call for a scrappage scheme to be introduced by Chancellor Alistair Darling.

'The scheme will provide the incentive needed and the evidence is clear that schemes already implemented across Europe do work to increase demand,' Everitt said.

Despite numerous meetings with the Government, Everitt says that no such commitment has been made.

Calls for the scheme to be introduced in the UK come as many European countries have experienced increased car sales after introducing scrappage schemes of their own.

Germany's year-on-year car sales were up by 40% in March, a figure that was boosted by the success of their own domestic scrappage scheme.

Paul Williams, chairman of the Retail Motor Industry Foundation, said: 'Measures to help to revive new-car sales in the UK, including the introduction of a vehicle scrappage scheme, must be enacted as soon as possible.'