More for you |
Big savings on our Car of the Year Awards winners2020 new car sales revealed: who were the winners and losers?Top 10 used SUVs for less than £10,000Used test: BMW 1 Series vs Mercedes A-ClassNew Dacia Bigster large SUV – what we know so far
Home
News
Seatbelt dodgers face tougher penalties
news

* On-the-spot fines double * £60 if you're caught without your seatbelt * Fines for illegal numberplates increase, too... 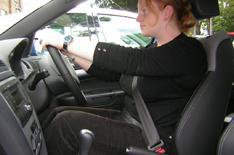 Drivers and their passengers who are caught without a seatbelt on will now face on-the-spot fines of £60 - double the previous penalty.

The Home Office says that seatbelts reduce the risk of dying in a 30mph crash by 60%, but says some drivers still to refuse to wear them.

Home Office minister Alan Campbell said: 'By increasing the fixed penalty, we are sending a clear message to motorists that we'll crack down on them if they are caught failing to take this vital safety precaution.'

However road safety charity Brake believes the increased fines don't go far enough. The charity said: 'Brake welcomes the increase in seatbelt fine, as people who flout the law are not only risking their own lives, but the lives of others too. Seatbelts provide maximum protection for minimum effort, saving more than 2,000 lives every year in the UK.

'However, we do think fines for traffic offences are generally low when you take into account that you can be fined 1000s for fly-tipping which is not a life-threatening offence. We would like to see much higher fines or fines linked to income to send a clear message out to illegal drivers.'

Motorists who display illegal numberplates that are the incorrect size or colour, or use the wrong font, will also face an increased fine.