* Euro NCAP names and shames car makers * Some car makers fit it, too many don't * Its availability differs across Europe... 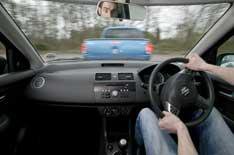 Car manufacturers still aren't fitting enough electronic stability control (ESC) systems to their cars as standard, even though the technology is cheap and widely available, according to car safety group Euro NCAP.

Euro NCAP's latest stability control availability survey also showed disparities in the availability of the system across Europe - so having a system in your car that could save your life depends on where you live.

The survey shows that, although some manufacturers, such as Ford, Hyundai, Mazda and Mitsubishi, have increased the amount of vehicles they sell with stability control fitted as standard, others have done poorly.

Euro NCAP singles out Vauxhall for not improving enough, even though stability control is optional on an increased number of its range, and Kia.

Because Kia has increased the number of models it is selling, many without standard ESC, it has effectively lowered the average standard fitment of ESC on its cars.

However, Kia has refuted Euro NCAP's claim that it's not keeping up with the pace on ESC. A Kia spokesman said: 'That's simply not the case. We look at it where it's appropriate in our ranges either as an option or as standard, but, at the moment, people don't want it. The uptake on ESC on new Kias is just 2% at the moment'.

The survey also reveals that some cars are sold with stability control as standard on all variants in some countries, while it's completely unavailable in other EU member states. It's most often unavailable in Ireland, Malta and Greece, but most likely to be fitted as standard in Denmark, Germany and Sweden.

Euro NCAP wants the system to be fitted as standard across Europe, because it says it could save 4000 lives every year. When it's available as an option, people aren't specifying it because it's expensive.

Michiel van Ratingen, Euro NCAP's secretary-general, said: 'Considering that ESC is the most effective safety device since the seatbelt, no car buyer should have to bargain over it. A greater effort to make ESC fitment standard across the board is needed.'

What is stability control?
Stability control recognises when a skid is beginning to happen and, using an electronic control unit that controls the anti-lock braking system, brakes individual wheels, helping to control the car before the skid develops.

The control unit processes information and applies the brakes much faster than the driver can, and can cost as little as 200 for car manufacturers to fit.