More for you |
LISTEN: Car of the Year PodcastNew issue of What Car? magazine on sale nowPromoted | 5 reasons why it makes sense to go electric todayBig savings on our Car of the Year Awards winnersWhat Car? Awards 2021: The best cars you can buy
Home
News
Skoda MissionL
news 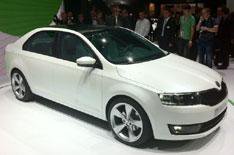 This is the Skoda MissionL, a near-production ready concept car unveiled at the Franfurt motor show.

The MissionL is a Golf-sized hatchback that will sit between the Fabia supermini and Octavia small family car.

It will debut in production form next spring at the Geneva motor show, and go on sale in the second half of 2012.

There's no official word on what Skoda will call the production car. Rumours suggesting the car will be called the Felicia are said to be wide of the mark.

The production car is expected to go on sale early 2013 and is part of Skoda's plans to release a new car every six months 'over the next two or three years'.

The first new model to arrive will be a super-frugal city car that is Skoda's version of the VW Up. The car is expected to be on sale in the first half of next year.

It will be followed by the small family hatchback. The next Octavia is likely to be influenced by the Vision D concept car revealed at the Geneva motor show. It's expected to grow in size to create more of a gap between it and the MissionL. The Octavia will be pitched at traditional Skoda buyers.