More for you |
Most (and least) reliable executive cars2021 BMW i4 electric car: what we know so farSave 55% when you subscribe to What Car? this Black Friday weekWhat’s the best smaller car for ease of access? The best Black Friday deals
Home
News
Small family cars 1-10
news 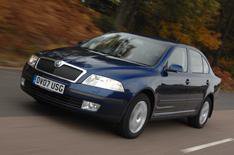 Their list prices might be tempting, but can budget-branded cars such as the Skoda Octavia satisfy more than pricier small family rivals? The answer's an emphatic 'yes'.

Vehicle owner satisfaction score: 81.1%
Overall ranking: 13th=
Skoda is the Volkswagen Group's value-for-money brand. So why is the Octavia such a strong and consistent performer? Well, for a start, it's unlikely to break down; owners told JD Power that the engines and transmissions could be relied upon. If trouble does strike, it's more likely to be a minor issue with the cabin.

Should you need to visit a dealer, you can expect good service; Octavia drivers told JD Power that helpful staff and work completed on time were the norm.

The Octavia is a very likeable car as well as a reliable one. Owners gave strong scores for the driving experience, the roomy cabin and the way the car looks.

What's more, the Skoda should be cheap to run. High marks were awarded for fuel and insurance costs, and service and repair bills.

Vehicle owner satisfaction score: 81.0%
Overall ranking: 15th
The Honda Civic runs the Octavia very close just 0.1% separates them. In fact, the Honda might have come top if it wasn't for the Civic's disappointing mechanical reliability. Otherwise owners found lots to praise, including the attractive cabin and stylish exterior. They enjoyed driving it, too.

When the Civic did need attention, dealers did their part to keep customers satisfied with prompt, efficient service and modest bills. Fuel costs and insurance were also said to be low.

If the Civic's reliability improves, Honda could be on to a winner in next year's JD Power Survey.

Vehicle owner satisfaction score: 80.8%
Overall ranking: 16th
The Toyota Corolla is no stranger to the top end of JD Power's results table. It was ninth overall in 2008 and is well inside the top 20 this year.

Judged purely on reliability, the Corolla fares better than the Honda Civic. Complaints about the bodywork and exterior were rare, but the rating for mechanical reliability was only average.

The Corolla's greatest strength is the dealer network that supports it. It's one of just three small family cars to have earned an excellent score for dealer service. Owners told JD Power that repair bills were low and fuel costs modest.

All in all, the Corolla is a strong package with no major weakness.

Vehicle owner satisfaction score: 80.7%
Overall ranking: 17th=
There are few more reliable small family cars than the Mercedes A-Class. Owners told JD Power that engine or transmission-related breakdowns were almost unheard of. As for problems inside the cabin, forget it these are very well made cars.

The A-Class would have been even higher in the results table if it was more rewarding to drive. Mercedes drivers also complained that the cost of servicing and repair was too high, although fuel bills and insurance premiums were more acceptable.

Mercedes-Benz dealers know a thing or two about keeping customers happy. Facilities were rated excellent and so were the staff.

Vehicle owner satisfaction score: 80.4%
Overall ranking: 24th=
A consistent performance from the Volkswagen Golf puts it in the top quarter of
this year's league table.

Don't expect too many problems with this car. Owners told JD Power that little goes wrong inside the cabin and that the mechanical parts are durable.

The Golf proved likeable as well as reliable. Drivers gave strong scores for ride and handling, interior practicality and the car's looks.

To do even better in this survey next year, Volkswagen dealers will need to offer better service, and lower running costs wouldn't go amiss, either. Overall, though, this is an impressive result.

Vehicle owner satisfaction score: 80.4%
Overall ranking: 24th=
The Volkswagen Jetta is essentially a Golf with a boot, so it's perhaps no surprise that the saloon achieves the same overall score as the hatch.

There are differences between the two, though. For one thing, Jetta owners were more happy with the quality of work done by Volkswagen dealers and found their cars ready for collection on time more often. Scores for reliability were evenly matched, but Jetta drivers reported more problems with the exterior of the car.

Owners awarded impressive marks for the driving experience. However, scores for the cabin and the way the car looks were only average, and lag behind those awarded to the Golf.

Vehicle owner satisfaction score: 79.6%
Overall ranking: 35th=
There's no disgrace in finishing 35th out of 101 cars, but Toyota will be disappointed to see its new model finish behind the venerable Corolla.

Running costs play a part. Auris owners weren't too impressed with fuel economy or insurance premiums, although the cost of servicing wasn't a worry. In fact, there's a definite pat on the back for Toyota's dealers, who proved excellent in every respect.

Decent reliability means owners didn't make too many unscheduled dealer visits, although mechanical problems and gremlins in the cabin were more troublesome than the exterior.

Owners were happy, rather than overjoyed, with the driving experience. It's a similar story with the cabin and the design acceptable, but not outstanding.

Vehicle owner satisfaction score: 79.5%
Overall ranking: 38th=
The Audi A3 moves in the wrong direction this year, dropping from 20th place in 2008 to 38th. That said, Audi owners still found plenty to praise, with enthusiasm for the way the A3 drives, the cabin and the looks. The dealers also earned a vote of thanks for their courteous staff and quality of service.

In terms of reliability, however, the A3 sits in the middle of the pack, dragged down by complaints about the stereo. Drivers said that running costs were no better than average, and insurance and servicing bills were dear.

Vehicle owner satisfaction score: 79.3%
Overall ranking: 41st=
This is a solid set of scores for the BMW 1 Series. It's not outstanding in any one area, but there's little for drivers to worry about, either.

Owners told JD Power that not much went wrong under the bonnet. Inside, the air-conditioning and stereo almost never gave trouble. Unscheduled visits to the local dealer were more likely to have been caused by the exterior.

BMW's dealers did a reasonable job, but could still learn a thing or two from the likes of Honda and Toyota charging less for their services would be a good place to start. Fuel bills and insurance premiums proved more reasonable.

Vehicle owner satisfaction score: 79.2%
Overall ranking: 45=
A mixed bag of scores means the Impreza finished mid-table. In some respects it's outstanding, in others Subaru has work to do.

The dealers are among the best around. Impreza owners were full of praise for their friendly staff, prompt service and the quality of work. Scores for the driving experience are also among the best in class. Owners were impressed with the looks and all-round visibility, too.

However, fuel bills and insurance premiums drained drivers' bank accounts with depressing speed. At least the cost of servicing and repair work wasn't too bad. Overall, reliability was average for this class.