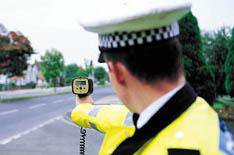 The boss of a firm that supplies speed cameras for use on UK roads has been banned for six months after he admitted speeding at more than 100mph.

Tom Riall, chief executive of Serco, was caught driving at 102.9mph on the 70mph A14 in Suffolk on January 14.

Serco has supplied more than 5000 speed cameras for use on the UK's roads.

Mr Riall was fined 300, banned from driving for six months and given six penalty points.

The speed camera firm boss, who was driving a blue Volvo when caught, expressed 'deep regret' during his court appearance in Sudbury, Suffolk.

Serco's website says it's partnership with police and local authorities has 'helped to save 100 lives a year by deterring excessive speed and improving compliance with traffic signals'.