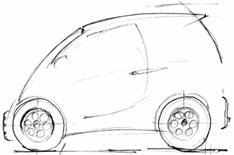 Gordon Murray, the man who designed the McLaren F1 supercar, has revealed details of his plans to build a revolutionary low-emission city car.

The car, codenamed T25, is half way through its 24-month development cycle. Weight-saving is key to its design, and it will weigh 800-1000kg, 400kg less than the average car its size, while still aiming for at least a four-star Euro NCAP rating.

'It's not just a question of losing a few kilos here and there,' said Murray. 'This is the biggest revolution in the mass-production of cars for 100 years.'

Murray says carbon dioxide emissions will be less than half the UK average and it is expected to score a Euro NCAP rating of at least four stars. The car will also incorporate six different layouts.

Murray set up Gordon Murray Design Ltd a year ago. The company now has 29 staff and is closely affiliated with Caparo, maker of the track-bred T1 supercar.

The T25 would be priced at the lower end of the market in Britain, with prices starting at around 5500.