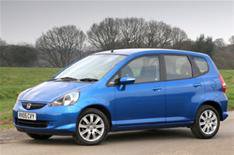 Two superminis tie for the top spot this year, thanks to exceptional service from dealers and top-notch interior quality.

Vehicle owner satisfaction score 83.1%
Overall 7th=
The years roll by but some things never change, like the Jazz finishing top of its class. This is the seventh year running it has finished in first place testament to its continuing appeal.

Admittedly, it has to share first position with the Yaris, but that has more to do with the Toyota catching up than any drop in the Jazz's performance.

In every aspect of our survey the Jazz was among the very best: owners reported that their cars were well built, reliable and comfortable. When they had to take them into the dealer, not only was it easy to book the car in, the quality of the work and the attitude of the staff was excellent.

Overall, only a couple of areas let the Jazz down, and even then only slightly. First, owners didn't think the car was particularly attractive to look at, and second, they thought some of the running costs could have been lower.

Vehicle owner satisfaction score 83.1%
Overall ranking 7th=
Toyota may have hit the headlines for all the wrong reasons earlier this year, but there are certainly no problems reported with the Yaris. In fact, its score has improved since last year, which is why it now proudly shares top billing in this group and nestles safely in the top 10 overall.

Like the Jazz, the Yaris has a strong showing across the board, being rated as at least 'above average' in every aspect. What really impressed its owners, though, is how cheap it is to run. They loved its low fuel consumption and the low bills for insurance and servicing.

On top of that, owners also reported very few problems with the car's reliability or build quality the interior came in for particular praise and they said they loved the looks of their car. Last, but certainly not least, Toyota's dealers also got a slap on the back: their staff, work and service were all rated as excellent.

Vehicle owner satisfaction score 81.1%
Overall 26th
We said last year that the arrival of the new Mazda 2 could boost the car's rating, and we were right. The car jumps up three places this year, completing a clean sweep for Japanese cars in the top three places in this class.

Generally, the Mazda put in a consistently strong performance, impressing owners with its build quality, good looks and enjoyable drive.

However, it certainly wasn't without its niggles. The ventilation system came in for particular criticism, while owners also had a higher-than-average number of problems with the engine and gearbox, as well as complaining that the dealers could do a better job.

Vehicle owner satisfaction score 80.8%
Overall 30th
Not for the first time, the Mini stood out in two particular areas: how it looked (inside and out) and how it drove.

In fact, in both respects it scored higher than any other supermini. Also popular among Mini owners were the low costs of servicing and repair, while there were also few reports of problems with the seats, the ventilation system or the car's mechanical reliability.

It wasn't all good news, though: there was plenty of criticism for the shortage of storage space inside, while owners also complained of wind noise. There were a higher-than-average number of complaints about the car's headlights, too.

Still, this remains a fine performance, and good enough to secure a place in the top 30 overall.

Vehicle owner satisfaction score 80.5%
Overall 37th=
Although the Fabia has improved its result this year, it's still not enough to repeat the car's 2008 performance, when it finished in the top 10 overall.

On the positive side, owners were full of praise for its low running costs, decent drive and good practicality, while the dealers were also rated highly. Mechanically, the car was reliable, too, and few people had any issues with the seats or ventilation.

However, no other car in this class received more complaints about water leaks.

Vehicle owner satisfaction score 80.3%
Overall 45th
It was the Note's space and practicality that most impressed its owners. Indeed, in this class, only the Honda Jazz was rated more highly in this respect. Just as attractive were the Note's low running costs and the above-average service from dealers.

The car's build quality and reliability came in for real criticism, though: there were a lot of problems with the doors, while owners also said the car was noisy.

Vehicle owner satisfaction score 80.2%
Overall 46th=
Many people may think of the Polo as an expensive option in this class, but low costs for fuel, servicing and insurance were among the things that most impressed owners of the Volkswagen.

On the other hand, they rated the Polo as only average for space and practicality, and said it could have been more enjoyable to drive. Like its cousin, the Skoda Fabia, the Polo suffered a high number of complaints about water leaks.

Vehicle owner satisfaction score 79.5%
Overall 51st
This is a solid, if unspectacular, performance from the Colt, but it's enough to give it a jump up the overall table, and is underpinned by its one 'excellent' rating for mechanical reliability.

Beyond that, owners also appreciated the low running costs (especially for servicing), as well as the quality of the service from dealers.

The Colt could have jumped even higher this year if owners hadn't been aggrieved by the way the car looked inside and out or worried by wind noise and the seat-folding mechanism.

Vehicle owner satisfaction score 78.9%
Overall 57th=
The Fusion is an unsung hero in the company's range it's Ford's second-highest-scoring model (the first is the Mondeo). Owners liked the spacious cabin, decent ventilation and the above-average service from their dealers.

However, it's easy to see why it finishes 57th overall, with below-average scores in every quality and reliability rating. Among other things, owners complained of the car pulling to one side, vibrations under braking, noisy ventilation fans and difficulties adjusting the seats.

Vehicle owner satisfaction score 78.6%
Overall 63rd=
The C2 is the highest-placed French supermini and it moves up the table from last year, but there's little else remarkable about its performance.

Perhaps unsurprisingly, its two best scores were given for the way it looked and how it drove. Owners also liked its low insurance costs.

However, there were several black marks: owners criticised the lack of space inside, both for passengers in the back and for luggage in the boot; there was also a large number of complaints about the windscreen wipers, while no other supermini had as many complaints about its seats' comfort and their range of adjustment.