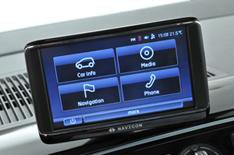 Even with the 14,900 Mini Cooper, you'll still have to pay 295 for Bluetooth and USB, or 1345 for Mini Connected with navigation. Admittedly, Mini offers a Media Pack which bundles all of that with voice control and a few more features, but the package price is a hefty 1700.

BMW itself charges some pretty spectacular prices for iDrive and related technologies. You can't even get iDrive on a basic ES-trimmed 1 Series, so you're immediately forking out nearly 700 to upgrade to SE. Sure, you do get a few extras, including standard Bluetooth and USB, but the basic Media Package Business iDrive system is 1550. If you want the Media Package Professional with its 8.8-inch HD display, 3D maps, real-time traffic data and hard disk storage, {it'll be 1995. Even then, BMW will want 295 more for a DAB radio.

A similar pricing structure applies to the latest 3 Series, although you can at least option the basic ES model with all the iDrive kit. You can have a TV tuner, too, for 825. It doesn't bear thinking about what quality and size of HD television set that would buy for your living room.

To be fair to BMW, its competitors among the premium brands tend to charge similar fees - with the exception of the new Audi A3. All of its line-up comes as standard with a basic Audi MMI system, a 5.8-inch screen, Bluetooth and USB, and it'll cost you a relatively reasonable 495 to activate the system's navigation features.

There's also a more expensive MMI system with a seven-inch HD display, 3D maps and various extras for an extra 1495. The provision of solid entry-level functionality at a reasonable price makes the premium set-up easier to tolerate.

Indeed, there are some features that should come as standard on almost every new car, most obviously Bluetooth and USB. DAB radio also falls into this category. It really makes no sense for manufacturers to be selling new cars in 2013 without a basic DAB radio tuner, even if plans to switch off FM radio in the UK have been postponed from 2015 to at least the 2017-2022 timeframe. The point is that it will happen and the cost of including DAB along with USB and Bluetooth functionality at the point of manufacture is extremely low.

In the meantime, check out our heroes and villains of infotainment for the best deals and the worst options-list offenders.

The heroes of mobile infotainment
The future of infotainment is all about mobile. Smartphones, tablets and touch-enabled laptops are crammed with features such as GPS navigation, HD touch-screens and wireless networking functionality. Theyre increasingly affordable too, and that, along with the tech-savvy expectations of car buyers, is now driving their use in in-car technology, and in different ways.

Mini Connected
1 Mini Connected uses a smartphone to power the cars infotainment features, and was one of the first to pair with Apples iPhone to deliver features including streaming internet radio and social networking.
Vauxhall Intellilink
2 Vauxhall Adams Intellilink takes things a step further by using the smartphones built-in GPS to power its sat-nav app. Its more flexible than Mini Connected because its compatible with iPhone, Android and Nokia.
Renault R-Link Platform
3 R-Link is different again. Its based on Googles Android platform and uses apps that can be bought from an online store. The new Clio gets it first, before its rolled out across range, including the electric Zoe.