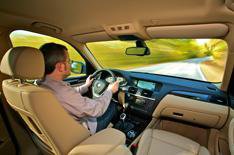 The new X3 is longer, wider and taller than its predecessor, plus the wheelbase has grown, so theres plenty of space for four six-foot-something adults in the cabin. Its just a pity the wide transmission tunnel means life isnt so comfortable for a central rear passenger.

Quality is harder to fault because the materials and fit and finish are a match for anything in the class. Whats more, the driving position is excellent, and BMWs iDrive controller is standard, so you can flip through an encyclopedia of entertainment, navigation and set-up menus quickly and easily.

Move round to the back of the car and youll find a well shaped boot that can cope with a considerable 550 litres of luggage, plus cargo space grows to a mountain bike-swallowing 1600 litres when the rear seats are folded. The backrests are split 40/20/40 for added versatility, and while they dont lie completely flat, the slight angle is unlikely to cause you problems when loading up.

Buying and owning
The X3 might be a much better car now, but that doesnt mean its much more expensive. In fact, it costs slightly less than the old 2.0-litre diesel model.

Look at key rivals, and youll see that it also undercuts the equivalent Q5 and is priced within 1000 of our favourite XC60, plus it should be cheaper to run than both thanks to a long list of green technology that includes brake energy regeneration and an engine stop-start system.

With a manual gearbox, the X3 averages over 50mpg and emits a modest 149g/km of CO2. Meanwhile, the automatic version has identical performance and economy figures, and produces even less CO2 (147g/km).
Dont think that BMW has skimped on luxuries, either. Leather upholstery, climate control, front and rear parking sensors and cruise control are all standard, as is permanent four-wheel drive. With the second-generation X3, then, BMW is back on form.
Steven.Huntingford@whatcar.com

What Car? says
The car the X3 always should have been

What's coming when?
The 2.0-litre diesel X3 is already available to order, but in SE trim only. The sportier M Sport model, which is expected to be the best seller, wont arrive in showrooms until the spring. A six-cylinder 3.0-litre diesel engine will also join the line-up at this time. However, BMW has no plans to follow the likes of Volvo by offering a two-wheel drive version to further reduce fuel consumption and emissions.