* The best sat-navs revealed * All budgets covered * See all the results, here... 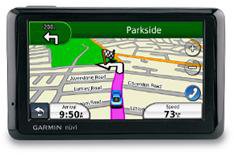 There's little point in spending hundreds of pounds if you only occasionally need directions. That said, some cheaper units will leave you feeling distinctly short-changed with their clunky menus, undersized screens and shortage of features.
Plump for Garmins nvi 1310, though, and you wont be disappointed. Although
its not the cheapest unit we tested, its reasonably priced and boasts a user-friendly menu system, easy-to-read maps and a 4.3-inch widescreen. You also get Bluetooth connectivity, allowing you to wirelessly link your mobile phone with the sat-nav to make handsfree calls on the move.

You dont have to compromise on build quality, either. Some budget sat-navs feel
a bit flimsy, but the 1310 is reassuringly solid, with a bright display and a speaker that remains audible at motorway speeds although you might find the monotone voice irritating on long trips. As if thats not enough, for a shade over 100 you also get a sturdy and easily adjustable windscreen mount, and a clever piece of software called ecoRoute, which can work out the most eco-friendly way to get where youre going.

You do miss out on maps for the rest of Europe, though. If you plan to drive
abroad, you could consider the nvi 1240 (82.98 from Amazon.co.uk), but the
cheaper unit has a smaller 3.5-inch screen and no Bluetooth.

Navigon's maps are detailed, and the 1410 comes pre-loaded with coverage of Europe. The windscreen mount is a bit of a faff to put together, but it is stable once secured.

The screen is only 3.5 inches wide, but the display is bright and the elongated windscreen mount holds the unit closer to your eyes than most rivals. However, the 1410 is more expensive than the Garmin, has a smaller screen and misses out on Bluetooth. Its menu system isnt as user-friendly, either.

The 1410 is handy when youre on foot, though. The display rotates according to whether youre holding the unit horizontally or vertically.

The Navman 475 is well specced for the cash. It gets a 4.3-inch display, traffic monitoring and even comes pre-loaded with maps of Europe. It also has a very simple menu system and clear maps, although it can be slow to keep up with the cars progress.

The plastic casing feels flimsy, too, and the screen mount wobbles on bumpy roads.

One of the cheapest units we tested, yet it comes preloaded with European maps for the whole of Europe. The screen is just 3.5 inches wide, but the upside of that is the nuvi 1240 will slip easily into your pocket. Its also simple to use, although the monotone voice might get on your nerves.

RAC 1100
Price 69.99 (Halfords.com)
For Low price; does the job
Against You get what you pay for
Verdict

You just cant argue with a pricetag of 70. Okay, the RAC 1100 is far from the best sat-nav you can buy, but it does the job and undercuts the winning Garmin by a sizeable 40. If youre on a tight budget and only need directions now and then, the RAC is worth considering.

TomTom makes some of the finest sat-navs. Frankly, this isnt one of them. Its pricey, given its sparse features list, it has a relatively small 3.5-inch screen and its plastic casing feels cheap. We cant see any reason to choose it over the identically priced Garmin nuvi 1310.