A game changer when new, the Audi R8 Spyder has movie star looks and a thumping V8 to add drama to your open top motoring.

The king of practical supercar motoring, can the 911 Cabriolet fend off this challenger to maintain its crown?

Britain likes a good convertible: we buy more than most major European countries. However, with our inclement climate, you wonder why that might be?

Well, manufacturers have been perfecting the refinement of open-top cars, and often their roofs can be erected quickly and electrically; so when the weather turns drizzly, you can be dry again in seconds - and that expensive hair-do will be protected. Then, when there is a brief break in the clouds, you can quickly lower that soft-top and get not only the wind through your hair, but a vital top-up of vitamin D from the Sun as well. We spend a lot of time in traffic jams; you might as well get a tan at the same time.

But these two drop-tops are not your normal sort of care-free, fun-in-the-sun sort of cars. These two are serious performance supercars. Having the roof up is not what having a super-cabriolet is all about, you want to be able to experience what all that performance feels like in its rawest form, not from behind a thin layer of glass and metal. 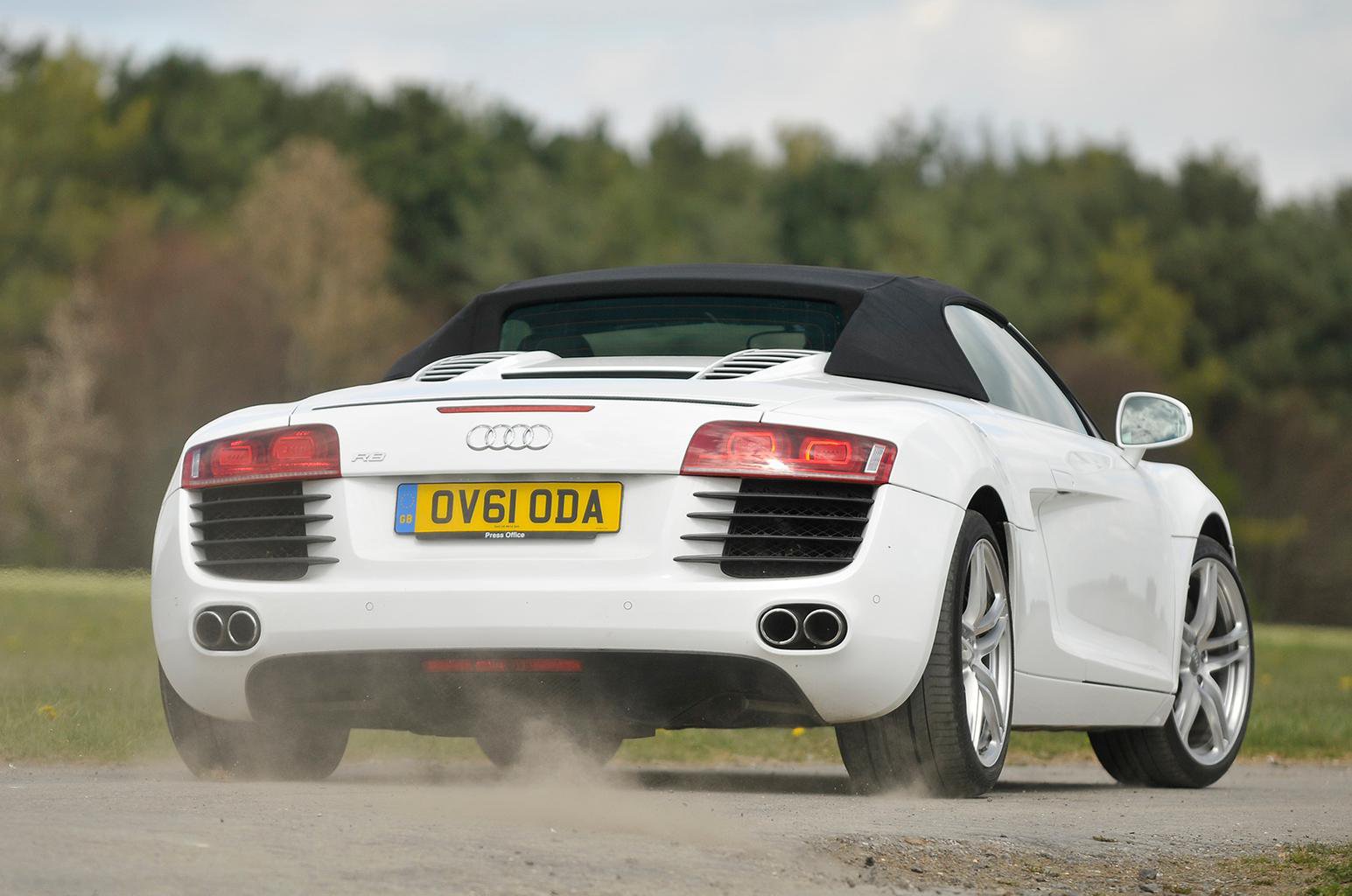 The Porsche 911 has been around for over 50 years and has built up a well-deserved reputation for being the world’s most usable everyday supercar. This generation of 911 was all new for 2012 - only the second time this has happened in the 911’s entire history. Even today, it sports a stunning interior and lightweight aluminium chassis to take the fight to the car that is trying to usurp its crown: the Audi R8 Spyder.

It must have been quite a shock to Stuttgart when Ingolstadt decided to become part of the premier league, but upstart Audi proved that they too could make a world-class supercar. They did, after all, buy Lamborghini back in 1998 so you’d hope they’ve learnt something from them. The Spyder on test is the more powerful of the two cars: with a 4.2-litre V8 and 424bhp compared to the 394bhp from the Porsche’s 3.8 flat-six. Despite the extra power, the Audi is quite a bit heavier, which means that this ought to be a very close fight. So, without further ado, we shall kick-off this test to find out which best.

The 911 uses the same basic layout as its predecessors. That means the engine – a 394bhp 3.8-litre flat six in the case of this S model – hangs over the back axle and sends power straight to the rear wheels.

The R8’s 424bhp 4.2-litre V8 sits in the middle of the car, yet despite its extra power and the advantage of four-wheel drive, it can’t match the 911’s straight-line speed. Even in slippery conditions, the lighter Porsche launches off the line more viciously and instantly starts to build a lead. All this performance is accompanied by a glorious howl.

The Audi isn’t far behind, though, and its V8 roar delivers real thrills every time you prod the throttle. Better still, you can hear the engine in all its glory even with the hood up, because you can lower the glass rear screen shielding you from its noise by pushing a button.

What ground the R8 loses on the straights it quickly makes up for in the corners. A squatter stance keeps the Audi flatter and more composed, and although the 911’s steering is as good as any modern electro-mechanical system we’ve tried, it simply doesn’t give you the same connection with the road as the Audi’s hydraulic set-up. That makes the R8 more rewarding and easier to drive quickly.

It’s a pity the Audi’s six-speed manual gearbox is so clunky. The Ferrari-style gate adds drama, but only really serves to slow changes. Porsche’s seven-speed manual – the first of its kind fitted to a production car – is much smoother. 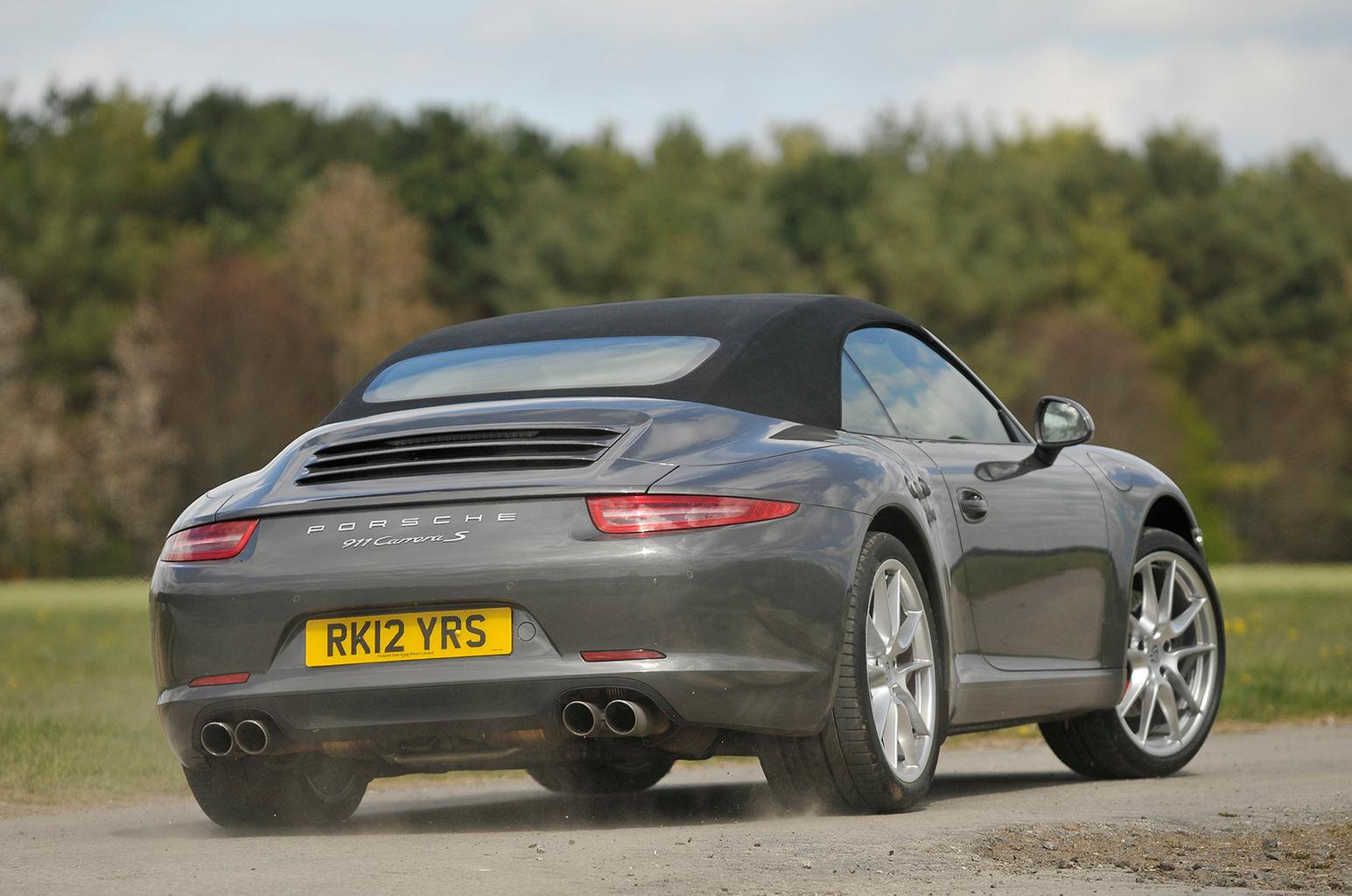 That’s not the only reason the 911 is the easier car to drive around town. It’s a pussycat compared with the R8 at low speeds because of its smoother drivetrain and less immediate throttle response. The Audi is a bit of a brute, so you need to be more sensitive with the controls to keep things silky.

The 911 is the better cruiser, too. Its taller gearing means the engine is spinning at just 2150rpm at 70mph, whereas the R8’s is hammering away at 3000rpm. The Porsche is also less prone to following ruts and cambers in the road, although its tyres produce significantly more noise.

Neither car has the punishing ride you might expect. The 911 is more comfortable at speed – if you keep the PASM adaptive damping system in its standard setting – but the Audi is marginally better at absorbing bumps around town.