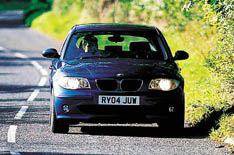 Since the latest version of the BMW 1 Series appeared in 2011, we've seen a gradual fall in the price of previous-generation cars.

However, the BMW badge has ensured depreciation hasn't been as quick as used buyers might hope, but considering the first 1 Series was launched in 2004, older examples are available at tempting prices. Early petrols with fewer than 40,000 miles on the clock are now available at sub-6000 prices.

The 1 Series is available as a three- or five-door hatchback, a two-door coupe or two-door cabriolet. The five-door hatch was released first, so there's a larger selection of these on the used market. For the best value and practicality, it's best to go for either of the hatchbacks.

The cheapest examples are the smaller petrols, which will cope perfectly well if most of your mileage is in and around town. The 116i originally had 113bhp, but was greatly improved when post-2007 cars were upgraded to 120bhp. The best bet is the 118i, which had 127bhp before '07 and 141bhp thereafter. The punchy petrol also delivers manageable running costs.

If you plan to spend a lot of time on the motorway, you should consider a diesel. There are more of these on the used market, but they are in demand, and prices reflect this. It's the 118d that we recommend, again, for its blend of power (141bhp) and average economy of more than 60mpg.

Entry-level cars have four electric windows and a CD player, but no alloys or air-con. ES adds all of those essentials, but we'd go for SE, which adds climate control and parking sensors. M Sport models get bigger alloys, lower and stiffer suspension, and a bodykit.

There are a few things to look out for when buying a used 1 Series. There have been issues reported with steering racks, manual gearboxes and clutches. Engine ECUs can fail, too, and windows have been known to seize.

Another thing to keep in mind is the tyres. The majority of models came with run-flat tyres from new, which are known to give an overly harsh ride. Some owners have swapped them for standard tyres, so make sure the car's tyre-pressure monitors haven't been affected as a result.

We found these on the forecourt