These super saloons offer luxury, practicality, and immense performance – plus they're surprisingly affordable as used buys. But which is best?...

BMW’s most powerful road car ever in its day, and based on one of our favourite used cars, the M5 has plenty going for it.

AMG has been tuning Mercs for decades, and this E63 is one of its finest creations, so the BMW won’t have things all its own way.

Let’s face it: if you want a car that truly does it all, you can’t get much better than a super saloon, and especially one based on a luxury car. Top of the range in their day, these ballistic machines usually suffer from heavy depreciation, and while that’s bad news if you’re buying new, it makes them a seriously tempting choice for the canny used car buyer.

Take the BMW M5, for example. It’s only just gone off sale – so recently, in fact, that its replacement hasn’t even been officially revealed yet – but you can still pick up a tidy early example like the one we have here for less than £30,000.

For that, you enough power to propel the big BM to 60mph in just 4.2 seconds, not to mention a luxurious interior with all the trappings you’d expect from a top-of-the-range car. And with five seats and a decent-sized boot, it’s practical enough to serve as a family car, too.

But things are about to get even more tempting, because the Mercedes E63 AMG, the M5’s biggest rival, is now available for even less – and that’s despite the fact it cost more when it was new. And with an even bigger engine than the BMW, not to mention the promise of similar levels of opulence and practicality, this big Merc could just steal a march here.

Both of these cars are powered by twin-turbocharged V8s. The BMW’s 4.4-litre engine kicks out 553bhp, but the Mercedes’s 5.5-litre is only just behind with 550hp. What’s more, the E63 is lighter.

Plant the M5’s throttle and its colossal rear tyres dig in hard, firing it toward the horizon at a rate that edges it ahead of the Merc. The power doesn’t stop coming, as the BMW’s seven-speed semi-automatic gearbox flies up through the gears with barely any pause in the power delivery.

The Mercedes isn’t far behind, though. Our test car was fitted with winter tyres that struggled for traction in the mild weather; if it hadn’t been hobbled by its rubber, the times would have been closer. Still, in the Merc you’re always accompanied by a magnificent baritone soundtrack that changes to a racing car-style roar as you rev it. The BMW sounds powerful, but it doesn’t make the same sort of breathtaking noise. 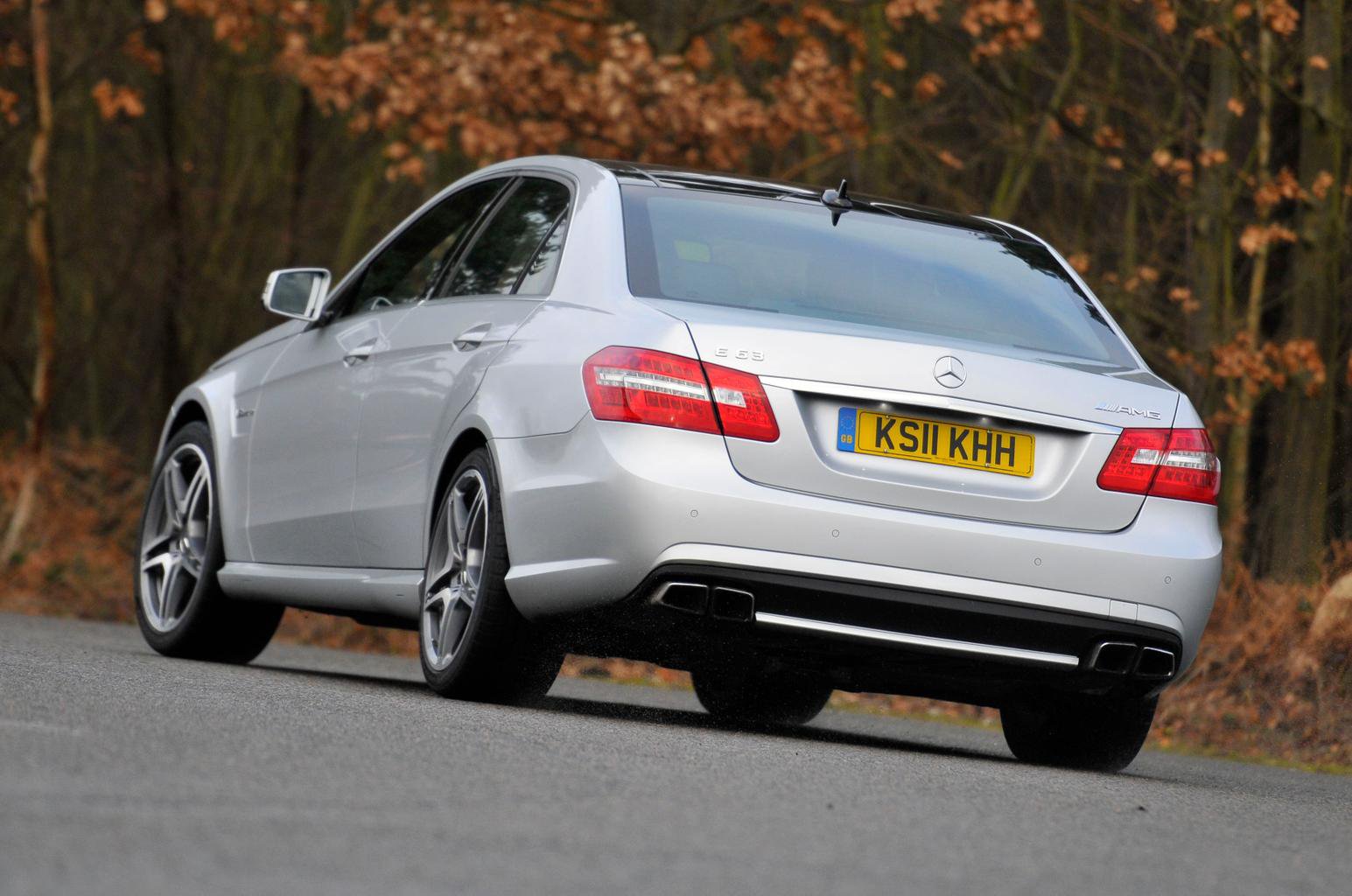 The first set of corners tells you the two cars are surprisingly different in character. Turn the M5’s chunky wheel and you feel its weight shift sideways, but it hangs on at speeds that the AMG simply can’t match, although again, our car’s rubber was a large factor. It’s just a shame the BMW’s numb steering spoils the enjoyment.

The Mercedes’ steering is lighter, but sharper and provides marginally more feedback. It’s a good job, too, because its rear end can get lively. The Merc also turns in quicker and feels more nimble, so although you’ll lose ground to the M5, you’ll have more fun.

Clearly these cars need to be fast and fun when you want them to be, but they’re based on executive saloons and will be asked to play that role most of the time. It’s here that the BMW has a clear edge. Select the softest suspension setting and it smoothes over bumps and potholes that unsettle the Merc. The AMG stops short of being uncomfortable, but you certainly feel more jolts in town. At higher speeds there’s also more wind and road noise to disturb the peace. 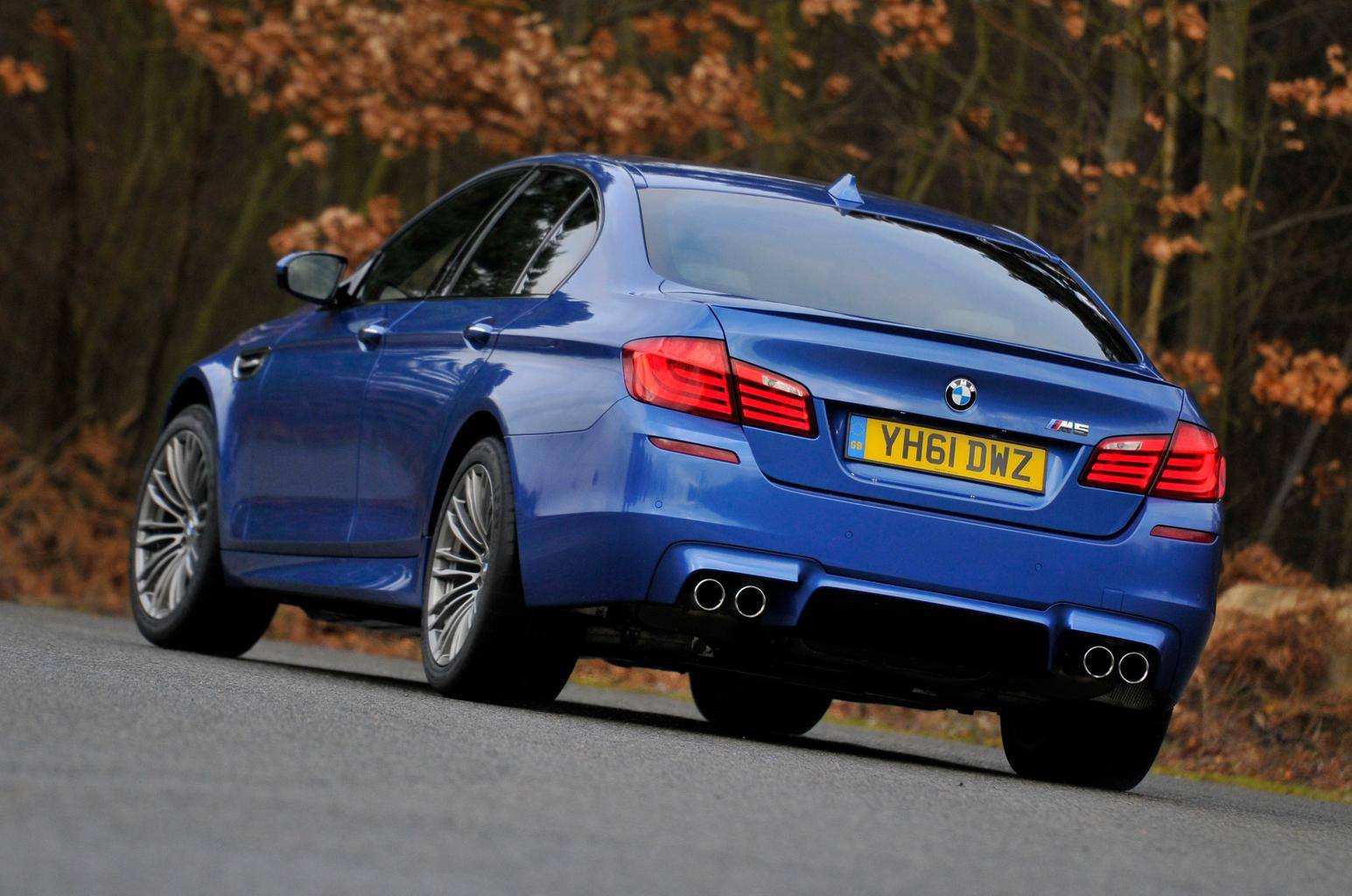