* Our favourite cars from Tokyo show * From superminis to sports cars * The cars UK buyers should keep an eye on... 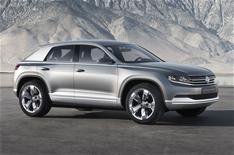 No prizes for guessing which model has prompted Volkswagens surprise show star; it took about five seconds for people to start referring to the Cross Coupe as VWs Evoque.

Described by VW as a pointer to the future direction of the companys SUVs, the Cross Coup is shorter than a Tiguan and has a much lower roofline. It also has a high waistline, so the side glass looks extremely shallow (like an Evoques, oddly enough).

The front end looks designed for the American market, with a sort of chrome gloss effect to blur the lines between both headlights. Disturbingly, VW design chief Klaus Biscoff says that will be the front-end look of all of the firms SUVs.

The concepts powertrain is pretty clever, with a 1.4 TSI petrol engine and an electric motor up front, and another electric motor at the rear. The area normally used for a transmission tunnel is filled with batteries.

Will they build it? Given the market trends right now, its hard to see VW missing another opportunity to put further presence in the SUV sector. Id expect it to be a more stylish, less practical - and more expensive - stablemate to the Tiguan.