More for you |
Every 5-star car on What Car?Used test: Maserati Levante vs Porsche MacanNew issue of What Car? magazine on sale nowMost and least reliable small SUVsRevealed: the car makers whose discounts have got bigger since lockdown
Home
News
VW profits unlikely to increase in 2012
news

VW profits unlikely to increase in 2012

* VW profits to remain stable * No boost in earnings * as it pays for new technology... 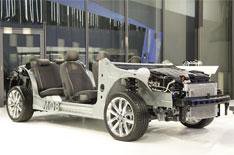 VW Group won't increase its profits in 2012 because it will be paying for investments in new technology, the company has revealed.

Chief among these costs is the new MQB platform, which was unveiled last month, and which will form the basis of many forthcoming Audis, Seats, Skodas.

The technology will provide a common platform that's capable of producing many different models on a single production line.

The new platform made its debut in the new Audi A3 that was launched at last weeks Geneva motor show.

It should boost profits and yield substantial savings, with production costs expected to be slashed by 20%, while assembly times could to be cut by 30%.

Initial expenditure on the MQB platform, has resulted in VW announcing that it is seeking to match last years record 9.4 billion operating profit in 2012, but is forecasting an increase for 2013.