What about the infrastructure?

* Most 'commercially viable' hydrogen car yet * Available to lease from 2012 * Well-to-wheel CO2 emissions of just 31g/km... 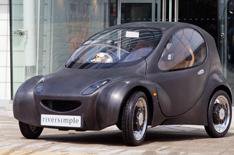 In order for fuel cell cars to become mainstream, we need a hydrogen infrastructure in place. Put simply, that means plenty of filling up points.

However, Riversimple thinks it has the answer.

The car's inventor, Hugo Spowers, said: 'The reason we've focused on urban cars first is that you can launch one in a particular city along with the infrastructure, whereas with an inter-city car you need a nationwide network of filling stations.

'If you start in small cities, just one filling station is enough. If you do this in enough small cities you've soon got the skeleton of a nationwide network, without ever taking a nationwide gamble.'