What Car? at LowCVP annual conference

* LowCVP annual conference * Debate on climate politics * On May 10... 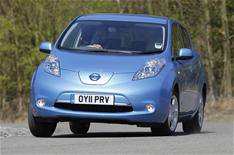 The 2012 Low Carbon Vehicle Partnership (LowCVP) annual conference takes place at London's Excel Centre on Thursday, May 10 and What Car? will be there.

The LowCVP conference will feature leading speakers and discussions about the state of climate politics, national and international policy developments and a debate on the push to meet the UK's Carbon Plan targets, which were published in December 2011.

The Carbon Plan sets out strategy for achieving the emissions reductions committed to in the first four carbon budgets up to 2027, and then reducing UK emissions by 80% from 1990 levels in 2050.

There will be sessions on low-carbon fleet management, freight, fuels and the perceived discrepancy between 'real-world' and test-cycle emissions.

Transport secretary Justine Greening is confirmed as keynote speaker and What Car? editor-in-chief Chas Hallett will be there to discuss findings from our True MPG tests.

The LowCVP Conference 2012 coincides with EcoVelocity 2012, which takes place at Excel from May 5-13. Its the second year of the event, which showcases the latest green models and technology from some of the leading car manufacturers, and provides an opportunity to test drive them.