What Car? in Shooting Stars classic 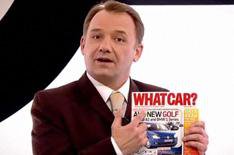 What Car? joined in on the eccentric and surreal antics in last night's Shooting Stars.

Hosted by Vic Reeves and Bob Mortimer, Shooting Stars returned to BB2 for a one-off special and needed the talents of What Car? for one of the biggest laughs.

Bob's response? 'No Ulrika What Car? sold 250,000 units last month' and held up a copy of the January issue of the magazine.

If you missed the episode you can catch it again on January 2 at midnight.