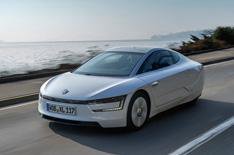 The technology offered on the ultra-efficient Volkswagen XL1 will feature throughout the company's next generation of cars, according to VW Group engineering boss Ulrich Hackenberg.

One example of this is a pair of cameras, which the XL1 uses in place of traditional door mirrors. These offer benefits such as reducing headlight glare from following vehicles.

Hackenberg also told What Car? that the bodywork from the XL1 could well make it to future Volkswagens. He claims that new production methods make the high-tech bodywork more cost-effective to produce.

He said 'If you look at supercars that have carbonfibre [bodywork], it takes 10 or 20 hours to make, but our way takes half an hour or less.'