The Golf GTE shares its underpinnings with the Cupra Leon eHybrid and Skoda Octavia vRS iV, and, surprise surprise, they have exactly the same power – 242bhp from the 1.4-litre turbocharged petrol engine and electric motor combined.

Funnily enough, in the GTE it exactly matches the Cupra Leon’s 0-62mph time of 6.7sec, so it’s a bit quicker than the Audi A3 TFSIe, Mercedes A250e and Octavia iV. The thing is, though, rather like the Cupra Leon, the GTE feels like it’s holding back that performance, even when you depress the accelerator pedal quite far. It’s only when you literally stamp it to the floor that you get the full dose of forward thrust.

That’s fine for general driving, because, even without the full gamut deployed, the acceleration is more than adequate in most situations. But, on those occasions when a quick burst is required to get yourself out of a tricky spot, being so binary at full chat makes the GTE hard to manage.

It’s front-wheel drive, you see, and dumping all that shove suddenly through the front tyres means that they struggle for grip, even in the dry. In the wet, the traction control is cutting in all the time to manage the wheel spin, defeating the point of having such prodigious poke and causing progress to become staccato: power ‘on’ then ‘off’, then ‘on’ then ‘off’ again. And when the wheels do lose grip they have a tendency to cause quite a shudder through the body as they skip, like bouncing bombs, over the Tarmac.

The GTE’s electric-only range of 40 miles (WLTP Combined) is about the same as the A3 TFSIe’s and Octavia iV’s but less than you can expect from a Mercedes A250e (44 miles). During testing in near-freezing conditions, the A3 TFSIe could go slightly further than the GTE with the A250e usefully ahead of both.

Using the brakes puts energy back into the battery to maximise the range, and often that creates issues with the feel of the brake pedal in electrified cars. The GTE’s is okay most of the time, but it can be inconsistent if you’re stopping from high speed, making it trickier to slow down smoothly.

The six-speed dual-clutch gearbox is, in the main, smooth, as is the transition between petrol and electric modes. There are some unexpected lurches and occasional thuds, although not as many as you’ll experience in an A250e. The A3 TFSIe or Octavia iV are both better behaved.

If you work the engine hard it’s not as intrusive as the A250e’s or the Seat Leon eHybrid’s, but it does boom in the background at 70mph. You also hear a fair amount of suspension noise, but wind and road noise are pretty well managed on the motorway.

The car we’ve tried came with optional Dynamic Chassis Control (DCC), which enables you to vary the suspension’s stiffness in multiple increments via the infotainment screen. In its softer settings, it feels firmer than the standard Golf’s, but not unpleasantly so, with plenty of control to check bounce over bigger bumps. Sharper intrusions, such as expansion joints, can cause a bit of a jolt, mind.

The GTE comes as standard with something called progressive steering. This has just two turns between locks, making winding your way around a multi storey car park easy, but can make judging quicker curves tricky. That’s because the steering acts noticeably faster once you’re around a quarter of a turn on the wheel. It’s nice and light around town, if not quite weighty enough for some at speed.

Considering the GTE is carrying quite a bit of extra weight over the standard Volkswagen Golf, its handling remains predictable and capable, if not quite as agile even the adaptive suspension is dialled in to its stiffest setting. If you want the best handling plug-in family car, we’d point you towards the A3 TFSIe. 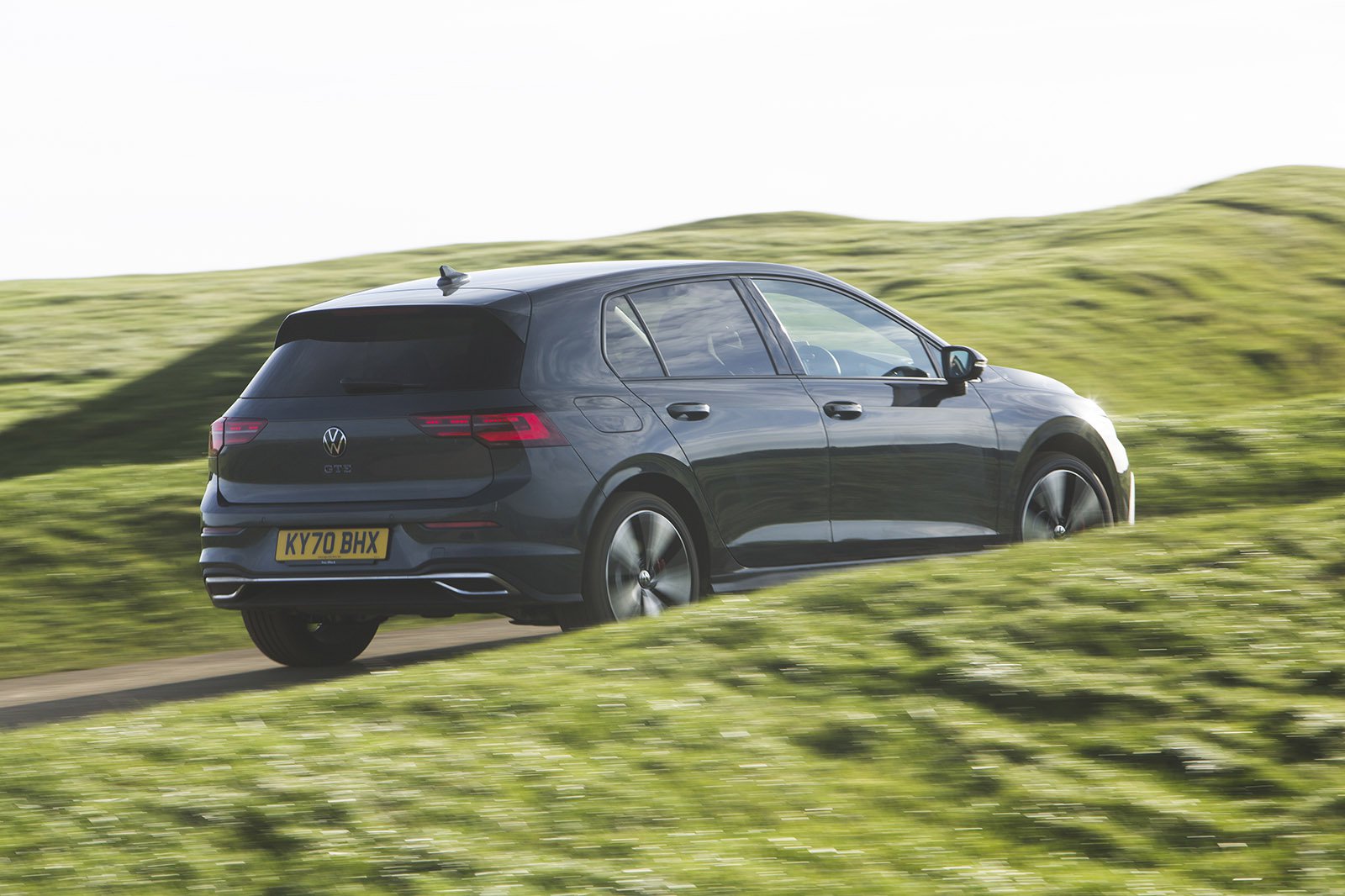