What’s so clever about the Volkswagen Polo is that it shares many of the attributes that buyers love about its larger sibling, the Volkswagen Golf, but in a smaller and cheaper to run package. Trouble is, the used small car class is a highly competitive one, packed with rivals that include the Ford Fiesta, Skoda Fabia and Hyundai i20, so it's a good job the Polo distinguishes itself by having an added layer of sophistication about it, without costing as much as an Audi A1.

As long as you avoid the 59bhp 1.2-litre petrol engine, the Polo is one of the best small cars for tackling big trips. In a 2014 facelift, that engine was later replaced by a 1.0-litre with 59bhp or 74bhp. The 74bhp version is okay for town work but runs out of puff on the motorway. In the original line-up, there was also a bigger 1.4-litre unit that's much happier, but it’s the 1.0-litre and 1.2-litre turbo petrol engines from 2014 onwards that make the most sense; they’re smooth and quiet, but also fuel-efficient. The diesel engines, particularly the Bluemotion models, are great if you do lots of miles, since they return fantastic fuel economy figures.

The Polo comes in a number of flavours: S, S A/C, Moda, SE, Bluemotion, SEL and R-Line. We'd avoid S models because they're very basic and don't even have remote central locking. S A/C has air-con, Moda has air-con as an option but adds a unique set of 15in alloys, front fog lights and an iPod connection for the stereo. SE, though, is a far better choice; it comes with 15in alloy wheels, air-con and electric door mirrors.

BlueGT is the only model to get the 1.4 TSI petrol engine that uses cylinder deactivation technology to save fuel, while the GTI has model-specific exterior look, sports suspension and 17in alloys.

Thanks to its composed ride, excellent visibility and light controls, the Polo is an easy car to drive in town. Keen drivers, however, will be better off with the Fiesta, which is more composed in bends and has sharper steering. However, the Polo is very refined for a small car, making it a great choice for those who regularly have to commute on the motorway.

Used three- and five-door versions are in plentiful supply, both offering more room for passengers than the equivalent Fiesta. The Polo's driving position offers loads of adjustment, with even the entry-level S version having a height-adjustable driver's seat. The boot is a decent size, although Bluemotion models do without split-folding rear seats in order to save weight, and therefore maximise fuel economy.

Notable accolades for this generation of Polo include being voted European Car the Year in 2010 and scoring top marks in Euro NCAP’s crash tests, with all models being fitted with electronic stability control as standard. 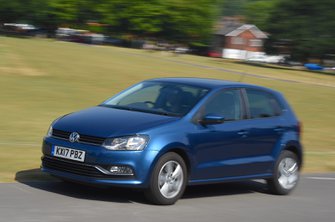