The Up is a little pricier than the Kia Picanto and is more closely aligned with the Hyundai i10. However, Up resale values are slightly lower than those of the i10, so it’s predicted to be worth less after three years.

The 59bhp engine's stop/start system improves fuel economy and cuts emissions by switching off the engine whenever you come to a standstill. Day-to-day running bills should be low, though, with an impressive official fuel economy of 51.4mpg and CO2 emissions of just 100g/km.

Thanks in part to its higher gearing, the higher-powered, six-speed Up GTI returns an even more impressive 53.3mpg. Being one of the cheapest hot-hatches you can buy, that fact only adds to its appeal. Click the link for more about ownership costs for the all-electric Volkswagen e-Up.

The entry-level trim is simply called Up, and comes with LED daytime running lights, manual air conditioning, electric front windows, hill-start assistance and the audio connectivity mentioned earlier. This and the GTI are the only models offered with just three doors, as well as the more practical five-door body that's offered across the range.

Two colour editions – White and Black – get appropriately coloured 16in alloy wheels, dashboard fascias and roof, but aren't worth the extra outlay for the sake of coloured paint. The Up Beats is our recommended trim, and adds niceties such as ambient lighting, a multifunction steering wheel and the upgraded Beats audio system for not a great deal more money.

Top-spec R-Line gets heated front seats and heated door mirrors, plus the lowered sports suspension, as well as additional R-Line badging. But in fact, this then makes it too expensive to be considered as a value car in What Car? terms.

The hot-hatch Up GTI gets the more-powerful engine, 17in alloys and sports suspension, plus adds various sporty styling details, while the electric e-Up only comes in one trim, with heated front seats, cruise control and a rear-view camera all included as standard. 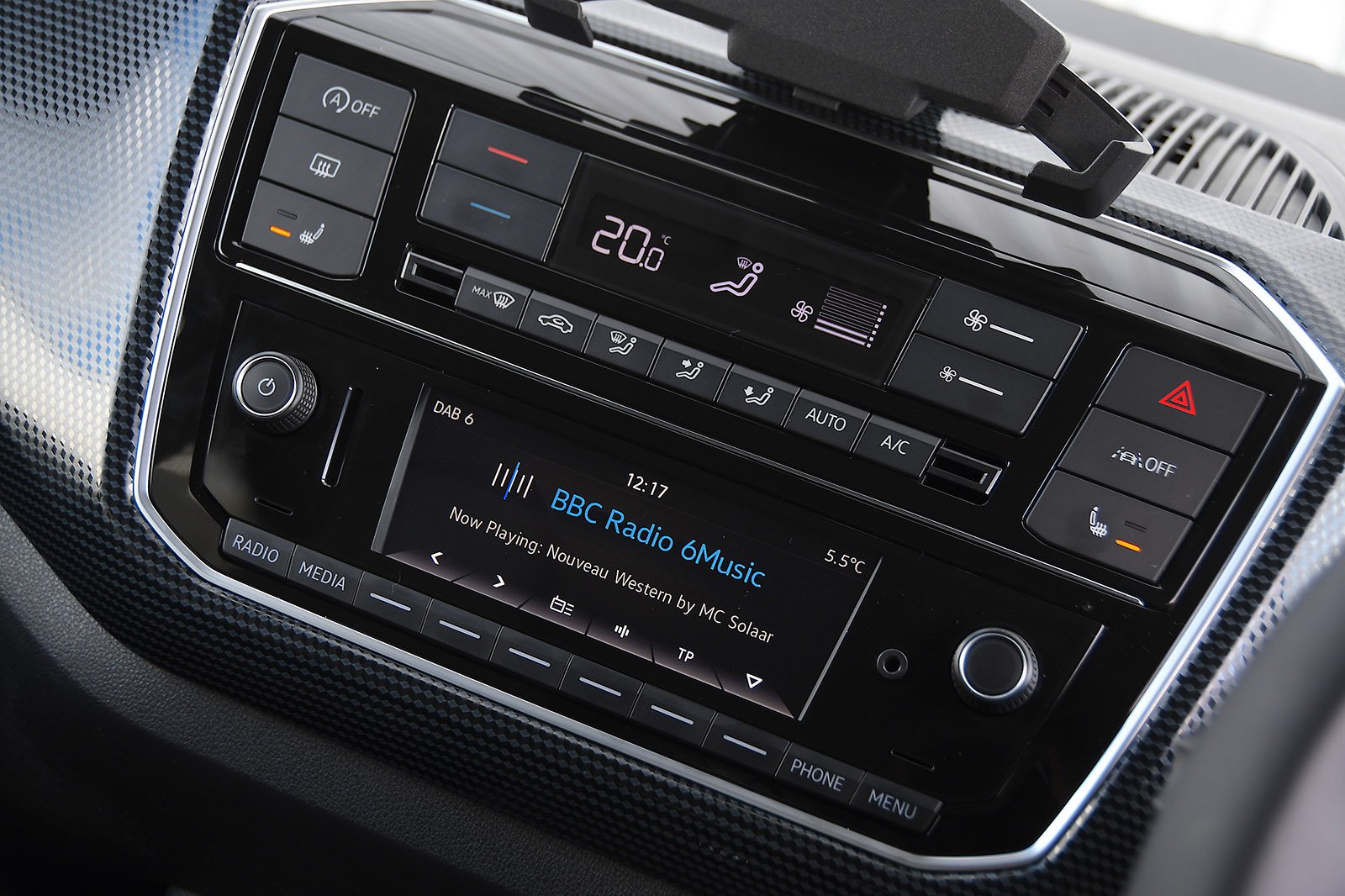 In the 2019 What Car? Reliability Survey, the Up scored disappointingly compared with others in the class; the Hyundai i10 and Toyota Aygo were both more reliable, with the the Fiat 500 finishing bottom of the table. Volkswagen as a brand finished 16th out of 31 manufacturers, below Toyota, Hyundai and Seat.

Like all Volkswagens, the Up comes with a three-year/60,000-mile warranty and one year’s breakdown cover. This is comparable to the cover provided by most car companies, but falls short of the five-year/100,000-mile warranty you get with the i10, and the seven years of cover provided by Kia for the Picanto. You can buy an extended warranty that covers your Up for up to five years or 90,000 miles.

All Ups come with stability control, twin front airbags and side airbags that extend upwards to cover the same area as curtain airbags. There are also Isofix child seat mounting points on the two rear seats.

The Up only scored three out of five stars when it was safety-tested by Euro NCAP in 2019. This relatively low rating came because an automatic emergency braking (AEB) safety system isn’t available anywhere on the range – we consider this as a vital safety feature, and it’s available as an option on the Kia Picanto. The Hyundai i10 scored four stars, but it was tested back in 2014 when the organisation’s tests weren’t as stringent. On the plus side, the Up did post better individual scores for its adult and child passenger protection than the i10 or Picanto could manage.

The Suzuki Celerio is cheap to buy, frugal and surprisingly sp...

The Vauxhall Adam has style, plenty of kit and a classy interi...

The Vauxhall Viva is easy to drive in town and comfortable eno...