The Citroen C3 is the French manufacturer's answer to the Ford Fiesta, Vauxhall Corsa et al. The first generation was originally launched in 2002, but it’s the model that was sold between 2009 and 2016 that is the focus of this review.

Available only as a five-door, it came with an unusual ‘Zenith’ extended windscreen on higher trim levels. This ran up above the driver’s head to create a very airy interior, although in reality you’ll often need to pull the adjustable roof lining forwards to prevent glare.

Petrol and diesel engines were offered, with some one of the former shared with the more expensive Mini. However, unlike that car the C3 placed an emphasis on ride comfort over sporty handling. As such, it copes with the demands of urban motoring well, with a soft ride that soaks up bumps and potholes.

The downside of that soft suspension is that on the open road the C3 lacks anything like the precision of a Ford Fiesta. It also isn’t as good as a Volkswagen Polo for long journeys, with a lot of wind and tyre noise and seats that aren’t as supportive as they look. The manual gearchange is also rather notchy, while if you want an automatic the choice comes down to a sluggish four-speed with petrol cars, or a jerky robotised manual with later diesels.

Leg room for rear passengers is tighter than you’ll find in a Polo, but that’s mainly because Citroen has traded it in order to have one of the larger boots you’ll find in this class. Storage up front is also lacklustre, with half of the glovebox taken up by the fuse box. 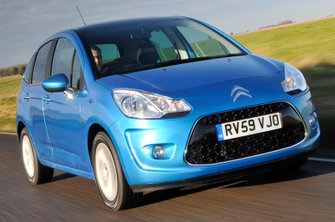