The driver gets electric adjustment for backrest angle and seat height in the Mercedes GLE, as well as adjustable lumbar support. Moving the seat back and forth is the only adjustment you'll need to perform manually. The standard seats are not quite as supportive through corners as an Audi Q7’s, but SUV fans will like their height.

If you add the optional AMG Line Premium package you get, among other things, a seat position memory feature and an electrically adjustable steering wheel. Both come as standard on the AMG 53, which also has extra side bolstering, making the seats more supportive in corners.

The GLE has a 12.3in digital instrument cluster as standard. It has crystal-clear graphics and can display a vast array of driving information but is a little trickier to customise than Audi’s Virtual Cockpit system. While the touch-sensitive controls on the steering wheel can be a bit fiddly, the relatively few buttons on the dashboard are simple to use and within easy reach of the driving seat, as is the central control touchpad (see infotainment section).

The Mercedes GLE’s lofty seating position gives you a good view of the road ahead. The windscreen pillars can partially obscure your view at junctions but don't present a serious problem.

The GLE’s slightly angular and narrow rear end means the view out of the back is not as clear as in some SUVs. However, a rear-view camera and front and rear parking sensors are standard, and a 360deg bird's eye view camera is available as part of the AMG Line Premium package.

As a bonus, every GLE comes with powerful LED headlights as standard. 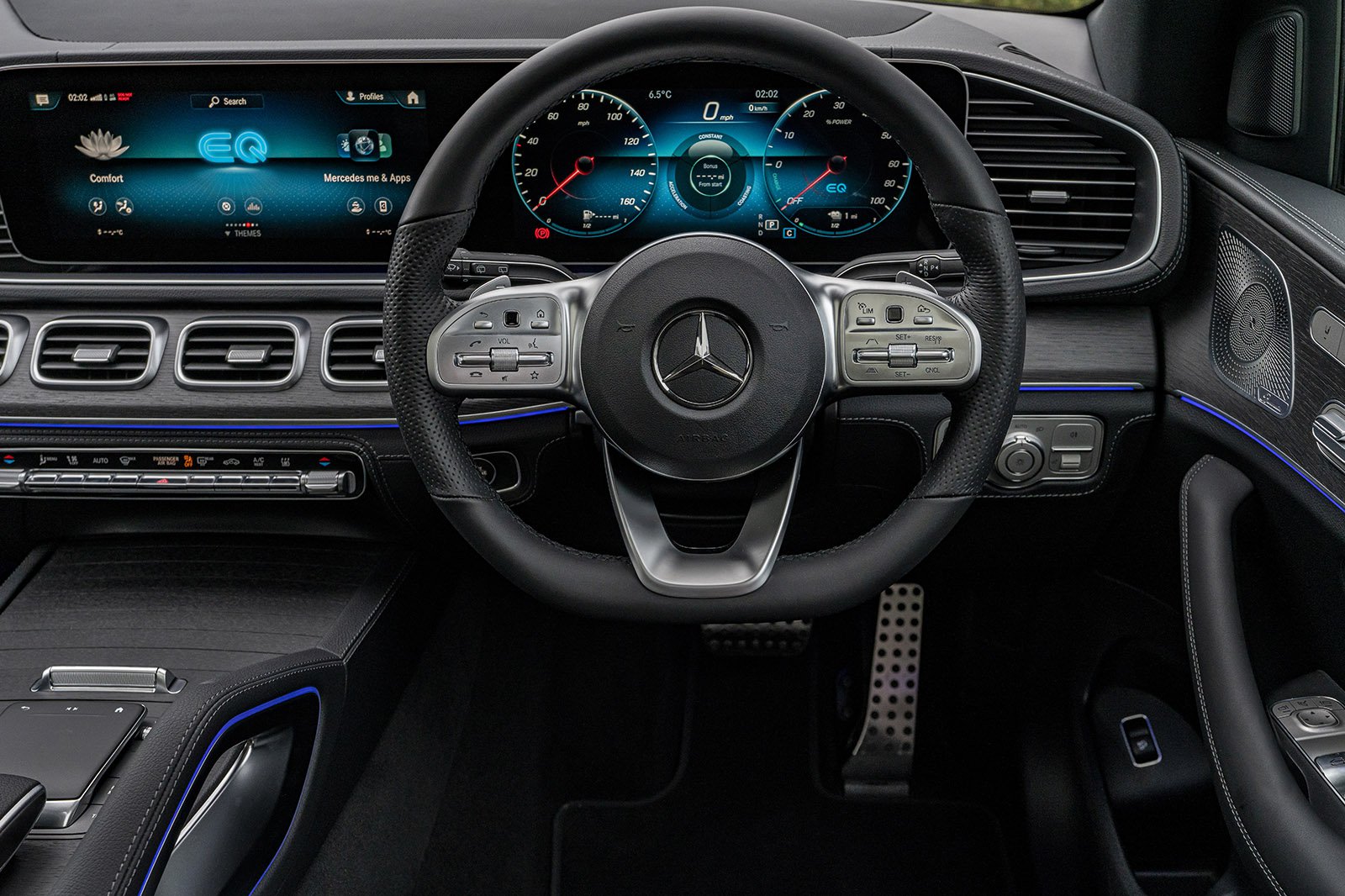 Every GLE comes with Mercedes’ top infotainment system, which features two 12.3in displays joined together to look like one widescreen across the dashboard. It has plenty of features, including a DAB radio, Bluetooth and sat-nav. The Siri-style ‘Hey Mercedes’ voice command function can recognise natural speech more effectively than the systems of many rivals.

You can control the system either by swiping and pressing a touchpad between the front seats, using the tiny touchpad on the steering wheel or simply pressing the screen. When you’re driving, it’s easier to use the touchpads (the main one has haptic feedback so you don’t need to take your eyes off the road). The rotary controller of the BMW X5’s iDrive infotainment system is even more intuitive.

It’s disappointing that you have to add the optional AMG Line Executive package if you want Apple Carplay and Android Auto smartphone mirroring. Wireless phone charging is standard, though.

Most of the Mercedes GLE’s interior materials look and feel suitably expensive, and there’s plenty of soft-touch plastic on the dashboard.

If you give the dashboard a bit of a prod – particularly around the climate control panel – it doesn't give quite the impression of solidity you get in its Audi and BMW rivals. Still, it’s certainly not a million miles away, and the difference probably wouldn’t bother you on a daily basis.